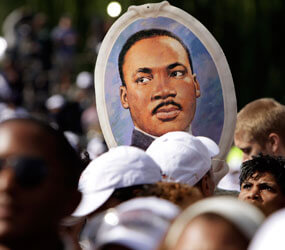 WASHINGTON – This past January, Nova Nelson sang as a soloist with the Archdiocese of Washington Mass Choir at Holy Redeemer Church in Washington at the annual archdiocesan Mass honoring the life and legacy of the Rev. Martin Luther King, Jr.

On Oct. 16, Nelson stood before tens of thousands of people from across the country who gathered at the National Mall’s West Potomac Park, and the Catholic young adult sang the national anthem for the dedication of the new Martin Luther King, Jr. Memorial. The five-hour ceremony culminated with a speech by President Barack Obama.

“It was definitely an honor, something I’ll never forget,” said Nelson, now director of the Archdiocese’s Mass Choir who also directs the gospel ensemble and children’s choir at her parish, St. Martin of Tours in Washington.

Nelson said that “what he was talking and preaching about to us … is so relevant now. It’s what we as a people are fighting for now, as far as justice, peace and equality.”

The singer said she was especially moved by seeing the faces of the people, who came from near and far to remember Rev. King’s legacy.

As the Martin Luther King, Jr. Memorial Dedication Choir sang “The Battle Hymn of the Republic,” she said, she also was struck by seeing Obama and his family on the giant screens erected on either side of the stage as the first family toured the memorial, accompanied by members of Rev. King’s family.

“That spoke a lot – his truth is marching on,” said Nelson.

In an interview the next day with the Catholic Standard, Washington’s archdiocesan newspaper, Nelson said that Rev. King’s call still resonates today, for all people regardless of race, color or creed, to work together, to help those who are hungry and homeless, those without jobs, and those who lack access to health care.

Nelson said Rev. King, as a man of God, drew strength from his faith, and those who seek to continue the civil rights leader’s work today can follow his example.

“For me, what’s so inspiring (is that) no matter how much he was hated or rejected, he kept going because he believed in God, and believed God would make a way, and he wasn’t afraid, “ she said.

“He had to keep pushing for what God wanted him to do,” Nelson added. “Sometimes, we get doors closed in our faces. We have to keep pushing, knowing God is walking with us every step of the way.”

The centerpiece of the new memorial is a 30-foot sculpture of Rev. King, which shows him looking forward, emerging from a granite Stone of Hope, “concentrating on the future and his hope for humanity,” according to a fact sheet on the memorial.

On Oct. 16, Laura Jenkins and her husband, Curtis, drove from their home in Clayton, N.J., where they are members of St. Catherine of Siena Parish, and followed the path of her grandparents, so they could witness the dedication of the memorial honoring the slain civil rights leader.

“(We’re here) just to be a part of history. We were here on the inauguration (of Obama),” said Laura Jenkins, who remembered two pictures displayed proudly on the wall of her grandparents’ home – portraits of John F. Kennedy and Rev. King.

Now the Jenkins’ have a picture of Rev. King displayed on the wall of their own home, as a reminder to them and their two children. “He gave his life for the cause (of civil rights). The least was could do was honor him when they opened the memorial,” said Curtis Jenkins, who said Rev. King’s faith shaped his life and work.

Christopher Isaac, a seventh-grader from Eastern Middle School in Silver Spring, Md., who attended the dedication with a group of fellow Boy Scouts from Troop 96 in the Washington area, said he felt honored to be there that day. “He (Dr. King) made a change through hard work, and that’s what I plan to do,” the youngster said.

Thelma Hines, a member of Resurrection of Our Lord Parish in Laurel, Md., came to the dedication with her elderly mother, Gwendolyn Grant.

“It’s an opportunity to celebrate a great man’s life,” Hines said. “I was born in the early ‘60s. I’ve seen the transition from segregation to greater civil liberties, not only in society in general, but also in the church.”

Obama closed his remarks by saying, “And so, with our eyes on the horizon and our faith squarely placed in one another, let us keep striving; let us keep struggling; let us keep climbing toward that promised land of a nation and a world that is more fair, and more just, and more equal for every single child of God.”