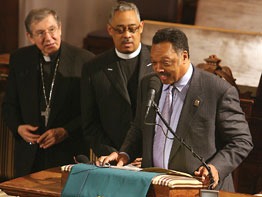 The Rev. Jesse Jackson served as the keynote speaker at the prayer service, and Bishop Denis J. Madden, urban vicar, was also present at the Bethel African Methodist Episcopal Church in Baltimore.

Bishop Madden listented as the Rev. Jackson, the founder and president of the National Rainbow Coalition, urged the 200-plus participants to join him Jan. 22 to march in the nation’s capital in protest of the housing foreclosure crisis.

“Don’t let them break your spirit,” the 66-year-old Rev. Jackson said in reference to the Department of Housing and Urban Development (HUD). “If we could march (in the 1960s) to use a toilet, certainly we can march to save our homes,” he said.

Black homeowners are three-times as likely to have obtained sub-prime loans to purchase their houses during the real estate boom of 2004-2005 as white mortgage holders, said the Rev. Jackson, who suggested minorities were the target of unscrupulous lenders.

When he talked about Dr. King’s famous oratories in Washington, the Rev. Jackson didn’t want to focus on the “I have a Dream” speech.

He wanted to zero in on the message the civil rights leader – murdered in Memphis in 1968 – gave when he objected to inequities that lingered after the 100-year anniversary of the Emancipation Proclamation. The Rev. Jackson compared it to black Americans now threatened with foreclosure in the sub-prime housing crisis.

“Dr. King said ‘100 years later we got the proclamation, but where is the emancipation? Here we are now 100 years later with a bounced check. I dream of the day you will honor that broken promise,’” the Rev. Jackson said.

Though Bethel AME Pastor Dr. Frank M. Reid III said Dr. King paved the way for many improvements for black Americans during his lifetime, he said much more needs to be done.

“Freedom isn’t free,” Dr. Reid told the congregation, as he urged them to dig into their pockets to help fund a donation to the National Rainbow Coalition. “We need to invest in freedom.”