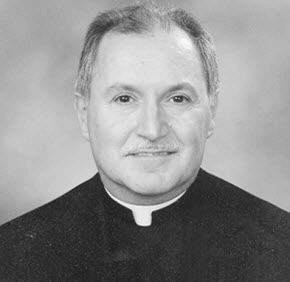 By Maria Wiering
mwiering@CatholicReview.org
In 2003, Steve Martin joined the Catholic Church. Now president of St. Joseph in Odenton’s pastoral council, Martin said his parish priest, Father William L. Viola, played a role in his decision to adopt the Catholicism of his wife and children.
Father Viola has been the parish’s pastor for most of Martin’s family’s tenure there; they have been part of St. Joseph since 1989, he said.
Now the 65-year-old priest is retiring March 1 after nearly 15 years leading St. Joseph’s flock.
Only time will tell Father Viola’s legacy at St. Joseph, Martin said, but he expects it to be the unity the priest fostered within his parish among a diverse group of longtime parishioners and transient newcomers drawn to the area by government work or military service.
“It’s no small thing when you come right down to it,” Martin said. “He’s been able to do it by knowing how to generate teams of people and work with different groups of people from various backgrounds. (He’s) a good communicator and good director of resources.”
Father Viola oversaw work to repair the church’s foundation, renovate the parish hall and develop the School of the Incarnation in Gambrills.
Parishioner and friend Beth Nardone described Father Viola as private, humble and compassionate.
“He’s a great listener, he loves children, he also has a wonderful sense of humor,” Nardone said. “He can crack me up.”
Father Viola was instrumental as a source of emotional and spiritual support as she battled breast cancer two years ago, she added.
Attempts to interview Father Viola were unsuccessful.
A native of Uniontown, Pa., Father Viola went to college and graduate school and worked as a caseworker in Western Pennsylvania before entering seminary. While studying at St. Mary’s Seminary and University in Roland Park, he decided to be ordained for the Archdiocese of Baltimore.
Father Viola was ordained in November 1984, at age 35. He served as a priest intern at Ss. Philip and James in Charles Village until June 1985, when he became associate pastor of Our Lady, Queen of Peace in Middle River.
Five months later he was named associate pastor of St. Matthew, Northwood, where he served until June 1991, when he became the associate pastor of Sacred Heart, Glyndon. He was there for one year before taking the role of associate pastor of St. Pius X, Rogers Forge.
In 1994, he undertook a three-year candidacy program to join the Society of St. Sulpice, an association of diocesan priests. He then served for two years as an associate pastor of St. John the Evangelist in Columbia.
In 1999, at age 50, he was named administrator and then pastor of St. Joseph. He has been there since, with the exception of a four-month sabbatical in 2004. He plans to retire near family in Baltimore County.
Prior to Father Viola’s 1999 appointment, St. Joseph had been staffed by Redemptorist priests for 75 years.
As the Catholic Review previously reported, the parish is undergoing a transition, as Church of the Holy Apostles in Gambrills will join with St. Joseph this year. Father James P. Kiesel, pastor of Holy Apostles, will assume responsibility for both parishes March 1.
Also see:
Winter havoc: Baltimore archdiocese receives 23 claims for burst pipes
More than a dozen Catholics receive awards at Mother Mary Lange Awards Banquet
PrevNext