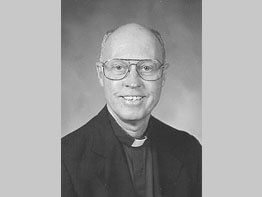 Even as a little boy growing up in a row house in Baltimore City, Father Milton A. Hipsley loved to “play priest.”

The former altar server at St. Edward, Baltimore, fashioned vestments out of crepe paper, which he would hide under a mattress so as not to be discovered by his four sisters.

After Father Hipsley was ordained to the priesthood in 1970, his mother informed him that she knew about the vestments all along, and that she would neatly fold them for her son.

As the 70-year-old pastor of St. Mary, Cumberland, reflected on his 38 years of priesthood and prepared for his retirement announced by Archbishop Edwin F. O’Brien effective July 1, “awesome” was the word that most often came to mind.

“My best and most awesome experience in my priesthood is celebrating Mass,” said Father Hipsley. “I look out at the congregation and say, ‘My goodness, how God has honored me with this, using me as his instrument.’ And the fact that I can confect the Eucharist – I am awestruck. I continually feel awestruck at the privilege of doing that, and I don’t think I’ll ever get over it.”

In addition to serving as pastor of St. Mary, Father Hipsley also serves as a chaplain for the Western Correctional Institution and for Cumberland Memorial Hospital.

He talked about the privilege of ministering to the incarcerated at both the federal and state prisons, of hearing their confessions and administering Communion.

“I love my priesthood, and I have loved every second of it,” said Father Hipsley, citing his gratitude to the bishops and to the authorities of the church.

He will reside at Mercy Ridge, a retirement community in Timonium, and hopes to continue ministering, he said.