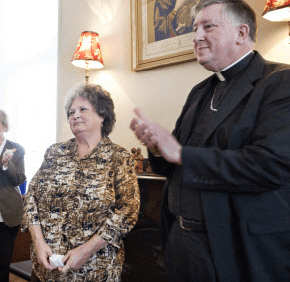 Carol McCain has been a mainstay at Holy Cross, Federal Hill, for more than three decades. Now, the longtime office manager is retiring – a decision influenced in part by her good health.

“I want to enjoy being able to go out with my friends,” said McCain, 65, whose last day on the job was March 29.

McCain, a parishioner of Holy Trinity, Glen Burnie, plans to spend her newfound free time with her friends and family.

“I have been working for so long,” McCain said. “I have nine grandchildren, I have an elderly mother – I would like to devote more time to them.”

In celebration of the retirement, the Holy Cross office held a party March 27.

“I kinda feel like dancin’,” McCain said. “Someone said to me, ‘I’ve never seen you smile so much.’ But, I’m going to miss everyone so much – even parts of my job. I liked my relationship with the people, my interaction with parishioners.”

During her tenure, Holy Cross joined Our Lady of Good Counsel and St. Mary, Star of the Sea in Federal Hill, forming the Catholic Community of South Baltimore. She also managed Holy Cross Cemetery in Glen Burnie.

In 34 years, McCain worked with six pastors and numerous associates.

“She knew the community and whose family members were ill,” Bishop Rozanski said. “Carol has become one of the family here.”

Liz Linski, the church’s housekeeper and cook from 1978 to 2008 and a friend of McCain’s, said every spring McCain helped her make crab cakes for the church’s crab cake dinner.

“When someone has that many years of ministry at one parish – and now one community – the anecdotal, oral history is missed,” Father Carrion said.

LaVerne Alt, finance manager for the parish cluster, said McCain was so dedicated to her job she would sometimes “stay all hours of the night.”

“She wants things completed a certain way because they are a reflection of her,” said Alt, 62. “You can’t teach someone what she knows. I don’t think she can fully be replaced.”