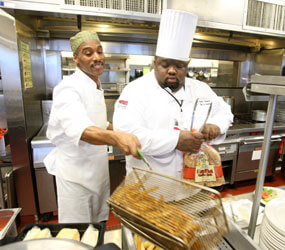 Residents of Oak Crest Retirement Community in Parkville have ovens in their homes, but Del Lloyd has noticed that many people only use them for storage.

“We don’t need to cook because the meals that are provided here are just wonderful,” said Lloyd, a 91-year-old resident who also serves on Oak Crest’s food committee. “We’re really spoiled. Everything is done for us. I’m sure we wouldn’t eat that well at home.”

Oak Crest and Charlestown Retirement Community, run by Erikson Living, boast dining programs that are among the most extensive among independent living communities in the region. They feature multiple restaurants, cafes, small pubs and menus that rely on the input of residents. A team of chefs and dieticians work to prepare food that’s healthy and flavorful.

Charlestown alone offers 120 different entrees in a five-week period, according to Vinson Bankoski, the Catonsville-based community’s director of dining services.

“The breadth of choices is pretty dramatic,” he said. “Even a professional gourmand only does, at most, 40 entrée items at home in a given year.”

Popular dishes include favorites like chicken pot pie, sour beef and dumplings, spaghetti and meatballs and Swiss steak. Staples like baked fish, grilled steak and chicken dishes are always available, and freshly made soups are also accessible. Ice cream is among the most popular dessert choices.

“I think the crab cakes are some of the best I’ve ever eaten,” Lloyd said with a laugh. “The staff tries really hard to please everyone. That’s not an easy thing to do when you have 2,100 people. They do a great job.”

Bankoski said the Charlestown staff works hard to get suggestions from residents and to incorporate regional traditions.

“We could never have a Thanksgiving turkey without sauerkraut,” Bankoski noted, referring to a longstanding Baltimore culinary custom.

Specialties have been established, including “Chicken Chesapeake” – chicken breast topped with crabmeat and an imperial sauce.

Chefs pay attention to current culinary trends and have been focused on slow-cooking methods.

“It’s the idea of braising food so you slowly extract the natural flavoring,” Bankoski explained. “We also have a very intentional use of dry and fresh herbs.”

Because many residents have special dietary needs, Bankoski said he is sensitive to the amount of sugar and sodium that is included in food.

“The challenge is to continue to develop flavors without leaning on salt, butter, heavy cream and dairy cream,” he said. “That’s not to say we don’t use those products. We employ them judiciously.”

Charlestown works to create special dining experiences throughout the year, Bankoski said. In April, the staff recreated the exact dishes that were on the menu of the Titanic’s dining room the night the ship struck an iceberg and was lost.

At Oak Crest and Charlestown, dinner is covered by the monthly fees. Breakfast and lunch choices are also available.