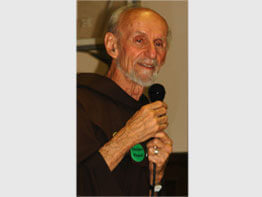 BURLINGAME, Calif. – The response to terrorism should not be war and violence, but love and compassion, Franciscan Father Louis Vitale said May 1 at St. Catherine of Siena Church in Burlingame.

“We should not be using physical energy which can destroy the world, but rather spiritual energy which was a part of what created us,” said Father Vitale, who recently completed a five-month prison sentence connected to a protest held at Fort Huachuca in Arizona.

Along with Jesuit Father Steve Ms. Kelly, Father Vitale unsuccessfully attempted to introduce evidence about torture during his trial for federal trespass at Fort Huachuca.

“War reflects a lack of imagination,” the priest told nearly 100 people gathered at the church for his talk.

Father Vitale related the story of Kathy Kelly, a teacher and peace activist, whose Iraqi experiences, the priest said, were emblematic of the difficulties American policymakers are facing.

Ms. Kelly spent time as a teacher in Iraq, where she encountered a boy who had drawn a picture of the destruction of the World Trade Center on Sept. 11, 2001. When she saw that the picture depicted jubilation over the event, Ms. Kelly cautiously confronted the child.

“He said, ‘Now the people in America will know what we go through every day,’“ said Father Vitale, relating the words of the Iraqi boy. The priest explained that bombardment and hardship had become a daily routine in the country, with a strict no-fly zone and crushing economic sanctions.

Ms. Kelly explained to the boy that children his age and younger were among those killed on the planes that day, a fact that made the boy cry. Father Vitale said by connecting the event to the child’s own experience, Ms. Kelly hoped to short-circuit the animosity that can eventually lead to terrorism.

The priest recently had a similar experience in Jordan, he said, where he met a man who was a prisoner at the U.S.-run Abu Ghraib prison in Iraq during the prisoner abuse scandal. Father Vitale said the man broke down in tears when he learned the Franciscan had been arrested while protesting torture.

“He didn’t think anyone in America would even care,” Father Vitale said.

The priest said that although the world may look bleak, he still has hope for peace.

“We were created to live in the perfect love of God, to pursue love, faith, hope and justice,” he said. “It will happen eventually, but it’d be nice if we could help it to come a little sooner.”