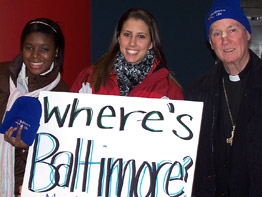 The annual March for Life in Washington, D.C., always provides a very public way for pro-life advocates to show their support for the sanctity of life.
But as important as the march is in raising awareness, promoting a culture of life isn’t a one-time spectacle, according to leading pro-life supporters in the Archdiocese of Baltimore. The real heavy lifting comes at home, where Catholics play a critical role passing pro-life laws, educating the public about the sanctity of life and helping women in crisis pregnancies.

Keeping informed about bills in Annapolis that would help or hinder the pro-life agenda is one of the most important ways to promote respect for life, said Nancy Paltell, associate director for the respect for life department of the Maryland Catholic Conference.

“There are some pretty frightening pieces of legislation that pop up,” she said. “You have to keep track of them.”

The MCC regularly provides legislative updates on its Web site and in e-mails, and The Catholic Review and other Catholic publications keep readers up-to-date, she said.

Beyond staying informed, Catholics must take the next step and write to their lawmakers or visit them in person, according to Ms. Paltell. Two of the most important items on the pro-life agenda this legislative session are passing a state program to support women in crisis pregnancies and replacing the death penalty with life sentences without parole, she said.

Parishes throughout Maryland are collecting letters to their lawmakers and Gov. Martin J. O’Malley in support of the crisis pregnancy bill. More than 10,000 people have already signed letters in a campaign to reach 100,000 letters for life, Ms. Paltell said.

Dawn Kuppers, respect life coordinator at the Cathedral of Mary Our Queen in Homeland, said parishioners are willing to do whatever they can in support of life. Pro-life updates are published in the bulletin and literature is placed on a table at the church. Pro-life workshops are held in the parish and school, and baby showers support women in crisis pregnancies.

Ms. Kuppers also coordinates her parish’s involvement in the Gabriel Network, which helps women who choose to have their babies instead of aborting them.

“When I get a call from a client, I put an e-mail out (to parishioners) with a wish list of items, and within two days I have everything I need,” Ms. Kuppers said.

Lea Linton, a 17-year-old senior and president of her school’s respect life club at Our Lady of Mount Carmel High School in Essex, said students have become very proactive supporting life in the last two years. In its cafeteria, the school displays posters showing the development of an unborn child.
Special fundraisers and baby showers are held, a spiritual adoption program encourages students to pray for women considering abortion, and students participate in a walk in support of people with autism. Pro-life issues are also discussed in the classroom.

Education is important, Lea said, because many people don’t understand how abortion hurts the unborn baby, women and men.

“It doesn’t fix anything,” she said. “It just causes more problems.”

Melissa Drinks, a theology teacher who moderates the respect life club at Mount Carmel, said growing enthusiasm for the pro-life cause was evident in the high number of students who attended the March for Life. In the first year Mount Carmel participated, 40 students attended on a bus shared with The John Carroll School in Bel Air. Next year, Mount Carmel hopes to send its own bus so more students can participate.

St. Maria Goretti High School in Hagerstown sponsors similar pro-life efforts in its community, sending more than 60 students to the march in a school of 215, according to Barbara E. Miller, director of campus ministry.
Marissa Alspaugh, youth minister at St. Timothy in Walkersville, said 25 parishioners – mostly teens – participated in the march this year. A wide range of life concerns are discussed at her parish, she said, including euthanasia, abortion, stem cell research and the death penalty.

“I think it’s important for us not to accept the status quo,” she said. “We can do better as a nation.”