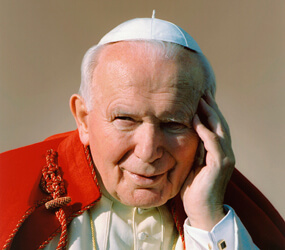 The Vatican did not deny or confirm that the vote took place because the process is supposed to be secret until Pope Benedict signs the decree recognizing the heroic virtue of his predecessor and declares him venerable.

Pope Benedict generally signs a dozen or more decrees three times a year: in April, in June or July and in December.

Members of the saints’ congregation meet regularly to study the life stories, eyewitness testimony and other documentation promoting the causes of proposed saints. The information is contained in a “positio,” or position paper, prepared by the promoter of the individual’s cause.

When the cardinals and bishops are satisfied that the “positio” is complete and demonstrates that the sainthood candidate lived an extraordinarily holy life, they recommend the pope sign the first decree.

Once the promoter of a cause identifies a potential miracle attributed to the candidate’s intercession, the documentation is turned over to the saints’ congregation. A panel of physicians, a panel of theologians and the members of the congregation all must recommend the pope sign a second decree recognizing the miracle.

When the decrees recognizing the heroic virtues and the miracle are signed, a date is fixed for the candidate’s beatification.

As the miracle for Pope John Paul’s beatification, the promoter of his cause has proposed the healing of a French nun. She allegedly was cured of Parkinson’s disease, the same disease from which Pope John Paul suffered.