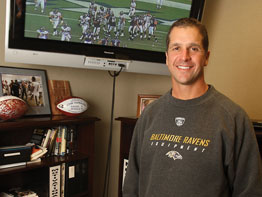 There was a time when John Harbaugh could walk into a barbershop or church without anyone knowing who he was.

Those days are long gone.

The 46-year-old coach of the Baltimore Ravens has his team one game away from Super Bowl XLIII in just his first year at the helm of the 13-year-old franchise. Harbaugh will take his team to Heinz Field Sunday to face AFC North Division rival Pittsburgh.

Eleven months ago, Harbaugh, a lifelong Catholic, was plucked from relative obscurity to take over a team that finished just 5-11. Few expected the Ravens to be on the verge of football immortality when the season began in September.

The Ohio native has tried to stick to the ideals that have defined his life: treating others with respect and staying humble. Catholicism, he says, gave him those principles and they apply to the average fan just as much as they do the multi-million dollar athletes he coaches.

As football-crazy Baltimore prays for a win against their divisional rivals on Jan. 18, The Catholic Review takes another look at a coach and his faith.

Tough guy with a soft heart

When the new head coach first arrived in Baltimore, he had a reputation as a hard-nosed guy with his players. Harbaugh doesn’t deny his regimen is tough. He imposes curfews and other restrictions, and acknowledged having very high expectations.

He likened his job to that of a shepherd who keeps everyone “moving in the right direction to get them to the pasture we want them to graze in.”

“I care enough about the players to be demanding of them – to make sure that everything we do is about attention to detail,” he said, “sticking to the plan and not backing out from the values and principles that we think are important.”

Players test him all the time, he said.

“Some guys will drift, some guys will wonder why we have to do this or why do you take that path,” he said. “And we’ll listen to them, but football is a hard sport and it takes strong men and takes hard work and that’s really what we’re all about.”

Harbaugh talks frequently about humility and looking out for the other guy.

“When you make yourself small and raise the other people up around you, that’s the whole Christian message,” he said.

Asked what he thought of players who run into the end zone carrying the ball with one hand or who whoop it up after sacking a quarterback, the coach said those actions are not necessarily bad.

When Harbaugh was growing up, he didn’t stay in one place very long. Jack Harbaugh, his father, was an up-and-coming coach who relocated his family as high school and college opportunities came along.

The family moved from Ohio to Iowa to Michigan over the course of a decade. When his father coached at the University of Michigan, Harbaugh attended a public high school in Ann Arbor, but he spent almost all of his elementary school years in various Catholic schools.

Harbaugh has fond memories of the nuns who kept him in line. After he clapped erasers on the walls, one punished him by making him write a sentence hundreds of times on the chalkboard. Another made him work as a janitor for two weeks after he scaled a church tower so he could clang the bell.

“Accountability was a big part of it,” said Harbaugh, whose favorite duty as an altar boy was ringing the bells at Mass.

“They made you be courteous and respectful and not be judgmental of others,” he said. “To understand right from wrong was the biggest thing.”

There was a natural rivalry between Harbaugh and his younger brother, Jim. Just a year after John climbed the church bell tower, Jim tried to match his brother’s feat only to be stymied halfway by a fear of heights. School officials had to get John to scale the tower one more time to talk his little brother down.

Jim admires his big brother’s dogged determination, and calls him his hero. He remembered that when John was a 10-year-old hockey player, the metal blade of a wayward skate sliced open his knee, sidelining him through baseball season. Other knee injuries slowed him in high school and at Miami University in Ohio, where he played defensive back.

“He never lost faith,” said Jim Harbaugh, a former Ravens’ quarterback who now serves as the head coach at Stanford University. “He always rehabbed harder than he thought was possible.”

Harbaugh faced a steep climb up the coaching ladder, laboring for more than a decade in the collegiate ranks before joining the Philadelphia Eagles in 1998 as a special teams coach and then their secondary coach in 2007.

Harbaugh was often among the runners-up when interviewing for jobs at places like Boston College, according to his brother.

“His relationship with God is the thing he leans on whenever he has tough times,” said Jim Harbaugh, noting that their father Jack and mother Jackie encouraged faith development among the brothers and their sister, Joani, who is married to Indiana University basketball coach Tom Crean.

“When he didn’t get a job, he would say, ‘God has a different plan for me,’” Jim Harbaugh said.

Father Christopher Whatley, pastor of St. Mark in Catonsville and Catholic chaplain for the Ravens, said the head coach is always at Sunday Mass with other Catholic coaches before games. On the road, local priests are called ahead of time to lead worship.

“He’s very prayerful during Mass and very attentive to what I have to share in the homily,” said Father Whatley, who celebrates the Ravens’ Mass at a downtown hotel near the stadium. “He’s there to gain some spiritual nourishment.”

It was Harbaugh who revived Catholic Masses for the Ravens after an absence of several years. He also attends a weekly Bible study at the Owings Mills training facility with his fellow coaches. Even though Sundays are the most high-pressured days of his life, Harbaugh said it’s critical to make time for God.

“I think it’s a way to honor God and praise God,” he said. “You just humble yourself a little bit before God and let him know that these things that we do are for you.”

Harbaugh’s wife Ingrid, a Lutheran, recently chose the Cathedral of Mary Our Queen in Homeland as the family parish for herself, her husband and their 6-year-old daughter, Alison. He said that the Harbaughs are attracted by the long history and intellectual depth of the Catholic faith.

“We’re trying to get her (Ingrid) to convert to Catholicism,” he said with a smile.

Before, during and after games, Harbaugh said he’s always praying – not for a win, but for God to draw near.

“I used to pray for other reasons, and every now and then, I’d pray for a turnover,” he said, “but more than anything else, I want God to stay close to me so I don’t get caught up in myself and basically embarrass myself. That’s selfish behavior.”

While he’s not necessarily praying for a win, the coach gladly encourages fans to do some praying for his team. Seated not far from a crucifix made for him by his daughter Alison, Harbaugh relished being in the Archdiocese of Baltimore, the Premier See.

“Catholic fans! Hey, you know, say a rosary!” he exclaimed with a grin. “Sunday morning for the Ravens!”

Informed that Father John B. Ward, pastor of Our Lady of Hope in Dundalk, always ends his game day Masses with a prayer for the Ravens, the coach laughed, leaned forward and issued a direct appeal.

“Father Jack Ward,” he raved, “keep bringing it!”
This is an updated version of an article that initially ran in the Nov. 20, 2008 issue of The Catholic Review.