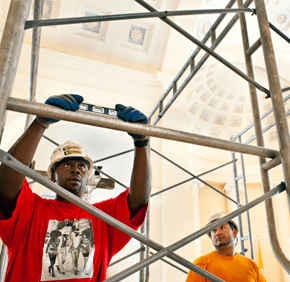 Nearly one year to the day after an earthquake rocked the mid-Atlantic, the process of repairing the Basilica of the National Shrine of the Assumption of the Blessed Virgin Mary in Baltimore is set to begin.

Dozens of cracks began appearing in the interior basilica domes after the Aug. 23, 2011 5.8-magnitude earthquake.

Workers will fix cracks in the interior domes of the basilica, under the main dome in the center of the church and under domes in the apse and west end of the basilica.

Basilica leaders had hoped the building avoided structural damage, but inspections showed that cracks to the brick masonry structure were also sustained, said Douglas Johnson, capital project manager for the archdiocese. To repair the cracks, 17, 20-foot stainless steel rods will be epoxied into place.

A total of 65 archdiocesan parishes and schools – from Westminster to Edgewater – filed claims after the earthquake. Some buildings are still being repaired.

St. Patrick in Fells Point, which sustained $1.8 million in damage, reopened on Ash Wednesday this year.

The process of repairing the basilica, initially scheduled to begin in June, started Aug. 13 when scaffolding was delivered. Erecting the scaffolding is expected to take seven weeks, a process that began Aug. 16. Repairs should begin in early October.

Initially, parish leaders hoped the repairs would be finished by Ash Wednesday in February 2013. Now, the estimated completion date is set for March 31, Easter Sunday.

Work will be done Monday through Thursday, and Friday is set aside as the cleanup day to prepare for weekend use, Johnson said.

The scaffolding will be professionally draped and lit to make the basilica look presentable for weekend Masses and previously scheduled weddings.

More than 20 couples were planning weddings at the basilica, said Robert Reier, the basilica’s operations manager. Four couples have selected other churches, while 16 couples still plan to have their weddings there.

Weekday Masses and daily tours continue in the basilica’s undercroft, said Reier, who is setting up a camera in the church to live stream the construction.

“The primary issue” is keeping the basilica open, said Reier, who noted the construction “could be a hassle. We’re just not going to let it be a hassle.”

It would have been “very easy” to close the church completely, Reier said.

“If we closed the church, the possibility is people are going to go somewhere else and not come back,” Reier said. “This way we’re maintaining our schedule.”

Seventeen spots inside the basilica have been identified as in need of repairs, Johnson said, who expects that number to “grow a little bit.”

“The extent of it is to be seen as we remove the plaster,” Johnson said. “We don’t really know what we’re going to find until we take the surface off.”

The repairs are expected to cost between $3 million and $5 million, Johnson said.

The same team from Henry H. Lewis Contractors, the Owings Mills-based company that did the two-year, multi-million-dollar restoration of the basilica, is making the repairs, Johnson said.

The historic building – the first cathedral in the U.S. – reopened in 2006 after the restoration.

Monsignor Arthur F. Valenzano, rector of the basilica, said keeping it open for Masses and weddings is “a real blessing” and a “win-win.”

He is grateful for the “tremendous cooperation” from the archdiocese, basilica staff, volunteers and parishioners.

“What often happens is when you have a challenge the staff and volunteers rally behind it,” Monsignor Valenzano said. “It has been a challenge. It’s all good.”