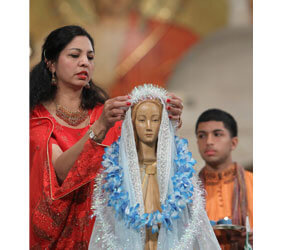 DULUTH, Minn. – There is renewed interest in Mary – her role in lives of faith, how to interpret references to her in Scripture, how she is depicted in art and literature – enough to spark a second “Mary in Our Day” conference, this one in Duluth and held on the feast of the Assumption, Aug. 15.

“Her call to holiness still echoes,” explained Christian Brother Mark McVann. “Mary continues today to be a major spiritual force and resource in the modern world.”

The College of St. Scholastica hosted this second exploration of the enduring significance of the Blessed Mother. The first was organized by St. Mary’s College of California last year.

Brother Mark, a professor of theology and religious studies at St. Mary’s, said the revival of interest in Mary and Marian devotions is evident in the volume of recent books on Mary, in the University of Dayton’s “The Mary Page” on the Internet, and of enough significance that the History Channel has done a series (and now a book) – “Visions of Mary” – which he called excellent.

The fact that there are sparse references in the New Testament makes discussions of Mary complex and open to interpretation, he said.

“Mary is more than an Old Testament saint,” he added. “She is the first one to hear the Gospel. Mary is the first Christian disciple. … When she appears at the foot of the cross, she becomes the model for believers.”

Father William C. Graham, a priest of the Diocese of Duluth and theology professor at St. Scholastica, pointed out that the church teaches during the liturgy what Mary’s role is. “The Roman Missal is a rich repository for us as we seek to reflect on and understand and teach what is acceptable on Mary.”

Father Graham, who also spoke at the first “Mary in Our Day” conference and organized the one at St. Scholastica, gave examples of how the church’s liturgical prayer through the year references Mary and reveals her role as the one who brings the Word to flesh. The Annunciation was one such instance.

“Mary’s honor is in her courageous faith-filled reply to the angel Gabriel,” Father Graham said. “The church’s prayer aims to shape us in the same faith-filled, joyful trust.”

Mary’s role as the mother of Christ and mother of the church is clear, he added.

“Every feast, every act of devotion to Mary, finds its dignity in turning our hearts to God,” Father Graham said.

Boston College theologian Nancy Pineda-Madrid put forward the case that the apparition of Our Lady of Guadalupe in Mexico in 1531 is “an American Pentecost,” a renewal of hope that, like the coming of the Holy Spirit both to the apostles after Jesus’ ascension into heaven and continuing today, the miracle of Guadalupe is an ongoing event.

Pineda-Madrid drew parallels between the dashed hopes of the apostles and the downtrodden, even suicidal native peoples of 16th-century Mexico.

The emblazoning of Mary’s image on the “tilma,” or cloak, of St. Juan Diego left a rich symbol that not only “mediates a sense of the divine,” she said, but in the cloak’s combination of Aztec and Catholic symbols the native peoples “see a future for themselves and their children.”

Our Lady of Guadalupe, Pineda-Madrid posited, initiates a zeal for mission, crosses racial and ethnic lines, and continues God’s promise that the presence of the Holy Spirit, will continue to be with and empower the faithful.

Brother Charles Hilken, also a Christian Brother and a history professor at St. Mary’s in California, used images and likenesses of Mary to explain why she continues to be influential in the 21st century.

“Christian faith is one that overflows into images,” noted Brother Charles, who was a curator for the “Vatican Splendors” exhibit that toured the United States recently. “Christian faith wants to express itself.”

As a variety of images of Mary from various artists through the ages came up on a large screen, he made the point that Mary has been envisioned by all cultures.

“These images serve as openings to the inner life of God,” he said. “An image of Mary prompts our memory – it’s shorthand for the faith we know,” and it can open for us a door to prayer.

“Whatever Mary becomes for the individual Christian, whether she is mother of the church or Our Lady of the Rosary or our refuge and life’s confidant or simply a repository of faith, her image defines for us beauty,” Brother Charles said.

Benedictine Sister Lois Eckes said Mary is “a woman for our time, a woman for all seasons.”

The prioress at the St. Scholastica Monastery added, “She’s such a model for our faith, one who helps us know that God is in our world in all this mess.”