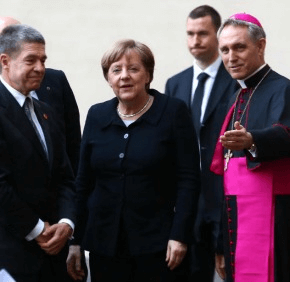 Archbishop Georg Ganswein
VATICAN CITY – Europe must recover the memories and lessons of past tragedies in order to confront the challenges Europeans face today that seek to divide rather than unite humanity, Pope Francis said.
While the founding fathers of what is now the European Union worked toward a “united and open Europe,” free of the “walls and divisions” erected after World War II, the tragedy of poverty and violence affecting millions of innocent people lingers on, the pope told European leaders gathered at the Vatican March 24.
“Where generations longed to see the fall of those signs of forced hostility, these days we debate how to keep out the ‘dangers’ of our time, beginning with the long file of women, men and children fleeing war and poverty, seeking only a future for themselves and their loved ones,” he said.
Pope Francis welcomed the 27 European heads of state to the Vatican to commemorate the 60th anniversary of the signing of the Treaties of Rome, which gave birth to European Economic Community and the European Atomic Energy Community.
Signed March 25, 1957, the treaties sought to unite Europe following the devastation wrought by World War II. The agreements laid the groundwork for what eventually became the European Union.
Entering the “Sala Regia” of the Apostolic Palace, Pope Francis placed his hand above his heart and bowed slightly to the European leaders before taking his seat. At the end of the audience, he and the government leaders went into the Sistine Chapel and posed for a photograph in front of Michelangelo’s fresco, The Last Judgment.
In his speech, the pope said the commemoration of the treaty should not be reduced to “a remembrance of things past,” but should motivate a desire “to relive that event in order to appreciate its significance for the present.”
“The memory of that day is linked to today’s hopes and expectations of the people of Europe, who call for discernment in the present so that the journey that has begun can continue with renewed enthusiasm and confidence,” he said.
At the heart of the founding fathers’ creation of a united Europe, the pope continued, was concern for the human person, who after years of bloodshed held on “to faith in the possibility of a better future.”
“That spirit remains as necessary as ever today, in the face of centrifugal impulses and the temptation to reduce the founding ideals of the union to productive, economic and financial needs,” he said.
But despite achievements in forging unity and solidarity, Pope Francis said, Europe today suffers from a “lapse of memory” where peace is now “regarded as superfluous.”
To regain the peace attained in the past, he added, Europe must reconnect with its Christian roots otherwise “the Western values of dignity, freedom and justice would prove largely incomprehensible.”
“The fruitfulness of that connection will make it possible to build authentically secular societies, free of ideological conflicts, with equal room for the native and the immigrant, for believers and nonbelievers,” the pope said.
The economic crisis of the past decade, the crisis of the family “and established social models” and the current migration crisis, he said, offer an opportunity for Europe’s leaders to discern and assess rather than “engender fear and profound confusion.”
“Ours is a time of discernment, one that invites us to determine what is essential and to build on it,” the pope said. “It is a time of challenge and opportunity.”
Europe, he added, will find new hope “when man is at the center and the heart of her institutions” in order to stem “the growing ‘split’ between the citizenry and the European institutions which are often perceived as distant and inattentive to the different sensibilities present in the union.”
The migration crisis also offers an opportunity for Europe’s leaders to refuse to give in to fear and “false forms of security,” while posing a much deeper question to the continent’s citizens.
“What kind of culture does Europe propose today?” he asked, adding that the fear of migrants “has its root cause in the loss of ideals.”
“Without an approach inspired by those ideals, we end up dominated by the fear that others will wrench us from our usual habits, deprive us of familiar comforts and somehow call into question a lifestyle that all too often consists of material prosperity alone.”
By defending families, investing in development and peace and defending the family and life “in all its sacredness,” Europe can once again find new ways to steer its course, Pope Francis told the European heads of state.
“As leaders, you are called to blaze the path of a new European humanism made up of ideals and concrete actions,” the pope said. “This will mean being unafraid to make practical decisions capable of responding to people’s real problems and of standing the test of time.”
Also see: