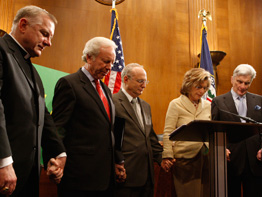 During a media briefing on Capitol Hill, Bishop Thomas G. Wenski – chairman of the U.S. bishops’ Committee on International Justice and Peace – joined bill co-sponsors Sens. Barbara Boxer, D-Calif., Joseph I. Lieberman, I-Conn., and John W. Warner, R-Va., and other Christian and Jewish religious leaders to discuss what he called “ground-breaking legislation” that also takes the poor into consideration when combating global warming.

“We welcome and support the leadership of these senators in lifting up and seriously addressing how climate change will disproportionately affect the poor and vulnerable in our country and around the world,” said Bishop Wenski, who heads the Diocese of Orlando, Fla. “This represents a significant advance on previous proposals. We are grateful for the hard work and renewed commitment this legislation represents.”

The bill – set to be debated on the Senate floor June 2 – calls for reductions in U.S. carbon emissions and the development of clean energy technology. It also establishes an International Climate Change Adaptation and National Security Fund expected to generate more than $342 billion over the life of the bill to help developing countries adjust to climate change and avoid its destabilizing effects.

At the request of the religious leaders, Senators Boxer, Lieberman and Warner added tax cuts and energy rebates for low and middle-income taxpayers in the bill to help those citizens pay for costs related to increased fuel prices.

“The real inconvenient truth is that those who contribute least to climate change will be affected the most and have the least capacity to cope or escape,” Bishop Wenski said. “The poor and vulnerable are most likely to pay the price of inaction or unwise actions. We know from our everyday experience their lives, homes, children and work are most at risk.”

To gain votes from Republican senators, Sen. Warner said the bill gives the president authority to re-evaluate climate-change regulations during times of economic crisis or in the case that advancing technology falls behind schedule.

“Together, we’ve made this a tripartisan effort,” Sen. Lieberman said, referring to the fact that the trio of senators represent the Democratic, Republican and Independent parties. “Now, we just hope this gets through the Senate.”

The lawmakers said they have more than 50 committed votes from other colleagues and are diligently working to get 10 more senators to back the bill.

“God does say to Adam and Eve, make use of this natural bounty, but protect it and guard it for future generations,” Sen. Lieberman said.

“We are running out of time and we need to act and act now,” Rabbi Saperstein said. “Today the whole garden is our earth and we need to tend to it. We’re taking a giant, groundbreaking step to do something remarkable.”