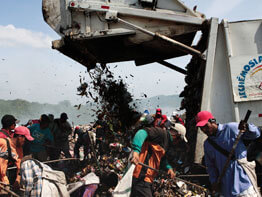 Thousands more vultures pick through garbage on the ground. They also compete with a herd of cattle that have been put here to graze on the waste of a city.

In their midst, hundreds of men, women and children, many in bare feet, scramble to find their own scraps of food and bits of recyclables.

A city garbage truck drives into the dump and the fittest and swiftest men run and jump on, riding along until it stops. They want to be the first to use their makeshift picks and bare hands to sift through the fresh load of refuse.

Seventeen-year-old Edwind has been coming to La Chureca every day for three years. He works at the dump 6 a.m.-5 p.m., earning $3 per day.

Nearly one-half of Nicaragua’s population of 5.5 million lives on less than $1 per day. It is one of the poorest countries in the Americas.

Yet, in the midst of the poverty, religious groups and international aid agencies offer hope.

When Monsignor Louis Pena first started his ministry at the dump 11 years ago, he saw hundreds of children picking through the garbage. He decided to take a multi-faceted approach – providing health care, feeding programs and education. Through his efforts, he has helped many children get out of the dump. For the past six years the John Cordisco Education and Feeding Center has provided 350 children a day with education programs and a nutritious lunch.

Now when he visits the dump he sees only a few dozen children. He speaks with pride about one of the first children helped by the center who graduated from high school last year.

At San Jose Protector orphanage about a half-hour outside Managua, the Colombia-based Sisters of the Annunciation provide food, housing, clothing, education and medical services to girls ages 1-15. Currently about 35 girls come from situations of abuse, poverty and abandonment.

“The nuns exemplify the Scriptures. They have incredible zeal; you can tell that Christ is really in their hearts,” said Angel Aloma, executive director for Food for the Poor Inc. The Florida-based charity recently took journalists on a tour of Nicaragua.

“Orphanages do not have a negative connotation” in Nicaragua, said Aloma. “Here orphanages are a place of joy and happiness.”

Not only is Nicaragua the third poorest country in the Western Hemisphere, the CIA’s World Factbook claims that it has one of the greatest inequities in income distribution in the world, with 45 percent of total income being earned by just 10 percent of the population. Poor countries do not have the social safety nets; when the poor in Nicaragua fall, they hit the ground hard.

The Christmas earthquake of 1972 leveled 90 percent of Managua and killed more than 10,000 people. Much of the relief aid channeled to the country flowed into the pockets of the family and friends of then-ruler Anastasio Somoza.

Sandinista rulers, who overthrew Somoza, began a fight against illiteracy and disease, but U.S.-backed counterrevolutionaries attacked social and economic infrastructure; a U.S.-backed government was installed after the 1990 elections.

Northwest of Managua, the colonial city of Leon has long been viewed as the liberal and intellectual center of Nicaragua. Inside the hauntingly beautiful Cathedral of the Assumption the renowned poet Ruben Dario is entombed under the statue of a lion. At a nearby restaurant, children beg for scraps from the plates of visitors.

Since 2004, Food for the Poor has worked with the American-Nicaraguan Foundation to build homes in Leon for families with the greatest need. Originally the plan was to build 35 homes, but by 2007 the groups had built more than 1,900 homes, as well as a school and a community center.

Along Calle Nueva Esperanza, or New Hope Street, many of the homes have neat gardens of vegetables and fruits.

Continuing northwest is the town of Chinandega. Nelson Rodriguez, a policeman, holds his 2-year-old son in his arms. Rodriguez’s shirt is neatly pressed; he wears his gun and badge proudly. Yet the house he stands in is made from corrugated scrap metal, a one-room squatter’s shack he shares with his wife and two children.

With no windows or adequate ventilation these shacks turn into hothouses in the tropical summer sun. There is no running water and no sewage disposal. There is no security; thieves can walk in and steal what little the families might have while they are away. There is also no stability. At any moment the landowner might arrive with a bulldozer and wipe out the entire community.

It is so hot in Leorgina Centeno’s shack that it is hard to tell her tears from the sweat on her face as she holds her two children.

“I am thankful for God’s grace that moves the hearts of others to help the needy,” she said as she wiped back tears of gratitude. The two families will soon be moving into new houses, part of a program funded by Food for the Poor.

“A home is the first step,” said Aloma. “When they get a home they have the security to leave the kids with grandparents, and the possessions are safe so both parents can seek work.”