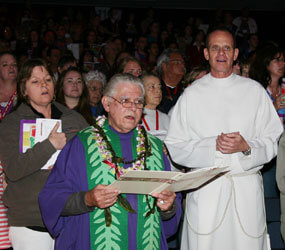 ANAHEIM, Calif. – Attendees at the annual Religious Education Congress in Anaheim were encouraged to see the current economic downturn as a chance to reject “business as usual” and develop “a common good culture” based on Catholic social teaching.

“Our goal cannot be to get back to business as usual,” said Sojourners founder the Rev. Jim Wallis in his keynote address Feb. 28 in the Anaheim Convention Center. “We have to say, ‘No, we want a new direction. We’ve tried the greed culture, and it hasn’t worked.’ We need to create something new, a common good culture, rooted in compassion.”

The Feb. 26-March 1 event, sponsored by the Office of Religious Education of the Los Angeles Archdiocese, drew close to 40,000 attendees who participated in about 300 workshops – some conducted in Spanish, Vietnamese and Korean – and a variety of special musical and spiritual events. A day with events just for youths was held Feb. 26.

Rev. Wallis told the educators that the current faltering economy was causing a “social and spiritual crisis” which he warned would “be in vain unless we learn how to live in a new way.”

This new way of living, he said, is “tied up in the common good.”

“There is no greater example of this than Catholic social teaching,” he added, telling participants, “I am here to tell you, as Catholics your time has come.”

Sister Prendergast, a Religious Sister of Charity and director of the archdiocesan Office of Religious Education, urged participants to make changes in “lifestyles and practices that will ensure a better world, a better place for all, a world oriented toward healing and away from destruction.”

In her Feb. 27 address, she spoke of the “bitter frosts” in today’s world and noted that it is “in these bleak and lean times that we must beg our God to shed light in our darkness.”

She urged catechetical leaders and pastoral ministers to recognize that they are “privileged indeed to prepare the soil” so that people can experience God’s love.

During the closing liturgy March 1, Los Angeles Cardinal Roger M. Mahony spoke of the “new intensity” of Lent this year because of the economy.

To overcome adversity, the cardinal encouraged the assembly to recall the gift of their baptism.

“Like Jesus, we are driven into the desert to be tempted by Satan, left vulnerable without resources of our own to overcome difficulties,” he said. “Left to our own devices, it can be miserable. But that desert experience is not what the Holy Spirit wants for you or for me. Remember that it is through the power of baptism that we gain identity with Jesus to find a way to carry those burdens.”

Many of the participants who spoke to The Tidings, archdiocesan newspaper of Los Angeles, said the congress gave them the encouragement they needed.

Seonaid Sanders of St. Joseph the Worker Church in Victoria, British Columbia, said she has attended the Congress for 20 years and still finds it “inspiring and a shot in the arm for our Catholicism.”