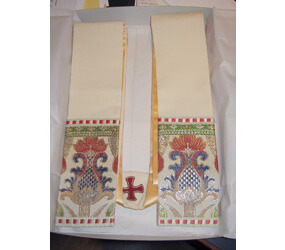 During President Barack Obama’s July 10 meeting with Pope Benedict XVI, he will present the pope with a stole that was placed on the remains of St. John Neumann.

“It’s a delight that something of one of our Redemptorist saints would be given to our Holy Father,” said Father Patrick Woods, provincial of the Redemptorists’ Baltimore province, which is headquartered in Brooklyn, N.Y. “We’re delighted as Americans that our president is visiting the Holy Father and delighted that something belonging to our province would be given to him.”

Father Woods said in a statement that the stole was an appropriate gift because it symbolizes the priesthood that was “at the heart of St. John Neumann’s life as a Redemptorist.” He also said the stole, placed on the saint who had worked extensively with immigrants, was symbolic of the new wave of immigration in the United States and the Redemptorists’ continued service to these groups.

A stole is a long, narrow strip of cloth, draped over the neck and falling to about the knees, worn by a priest or bishop when celebrating Mass or presiding at other liturgical ceremonies.

Louis DiCocco, president of St. Jude Liturgical Arts Studio, an architecture and design firm based in Pennsylvania that specializes in building and restoring churches, was instrumental in obtaining the stole for the president, according to the Redemptorists.

His firm designed and built a chair used by Pope Benedict at the Basilica of the National Shrine of the Immaculate Conception in Washington during his visit in April 2008.

DiCocco was approached by the Obama administration about a possible gift for the pope.

“They wanted to find an antique chalice, but I suggested it was important to get something more personable,” DiCocco said in a statement. “I told them about this stole that was something that belonged to an immigrant who was so instrumental in serving immigrants and building Catholic schools. What better than the stole that represents the priest?”

St. John Neumann, Philadelphia’s fourth bishop, is enshrined in a glass casket under an altar at St. Peter the Apostle Church in Philadelphia. New vestments have been placed on his remains four times since his 1860 death – in 1903, 1962, 1989 and 2008.

Born in Bohemia March 28, 1811, St. John Neumann was ordained a priest in 1836 and became a Redemptorist in 1842. According to the Archdiocese of Baltimore Web site, he arranged for the School Sisters of Notre Dame to locate in Baltimore and was the first rector at the Shrine of St. Alphonsus.