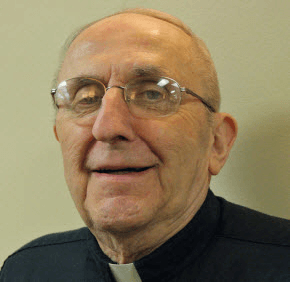 A funeral Mass for Redemptorist Father Francis Poux will be offered Sept. 21 at noon at Stella Maris, along Dulaney Valley Road in Timonium. Internment will follow at Sacred Heart of Jesus Cemetery in Baltimore.

A former missionary who served as an associate pastor of St. Joseph, Odenton, and Our Lady of Fatima, Baltimore, Father Poux died Sept. 17 at Stella Maris’ St. John Neumann Residence. He was 78 and had served 50 years as a priest.

While at Our Lady of Fatima, he was known for a deep commitment to hospital ministry at nearby Johns Hopkins Bayview Medical Center.

“(Father) Poux covered Bayview Hospital like a blanket,” said fellow Redemptorists Father Michael Sergi and Father Kevin Milton, two former rectors of Our Lady of Fatima, in a joint statement. “He went every day and brought the sacraments to the Catholic patients there. All the nurses knew him by name because they realized how much comfort he brought to the sick when they needed a priest most.”

Born in 1933 near Meadville, Pa., Father Poux professed his first views in 1957 and was ordained a priest in 1962. His classmates recall him as a talkative priest with a strong, bass singing voice and athletic skill.

Father Poux spent the first 25 years of his priesthood in Brazil, including three years as the superior of several Redemptorist communities there. Redemptorist Father John Roche, who ministered in Brazil with Father Poux, recalled in a statement that “life was rough.”

“In those days, our surroundings were extremely poor,” he said. “We didn’t have electricity continuously throughout the day and no water either. Geographically, the territory was four or five times larger than Texas but with only 33 kilometers of asphalt – everything else was sand and mud – and the only reason we had some pavement was because a military general lived at the end of the road.”

Despite these challenges, the two priests “functioned well with the Cursillo movement, which brought life to the church and to the people,” Father Roche said.

The Cursillo movement is based on a three-day retreat centered on prayer, study and Christian action.

Redemptorist Father Paul Miller, a classmate who began ministering in Brazil the same year as Father Poux, said in a statement, “I knew he would do well because he was a solid priest, even though we rarely saw each other in Brazil because we were stationed miles apart.”

After returning to the United States in 1989, Father Poux served in parishes in Pennsylvania, Massachusetts and Ohio, as well as at St. Joseph in Odenton from 1993-1999 and Our Lady of Fatima from 1999-2011.

He retired from active ministry in 2011 and he moved Stella Maris.

As the age of 23, Father Poux wrote that while discerning his religious vocation, he attended a mission led by a Redemptorist. He was familiar with the order, but he was struck by this particular priest.

“This priest who gave such down-to-earth sermons, who stood at the altar rail in a long black cassock with the big rosary hanging from his wide cincture, and who clearly meant every word he said, this priest captured my eye and my heart,” he wrote.

“Without knowing just what the Redemptorists did, or what kind of life they led, I wanted to be one of them,” he added. “He was giving his service to God, yet in talking to him, I discovered that in doing this, he was one of the happiest men I had ever met. He loved his life, his order, and his God. He showed me what the religious life held out to a man. … Love of God . … Peace of soul.”