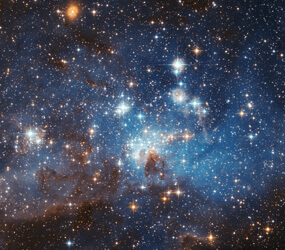 VATICAN CITY – Life emerged on earth thanks to a 12 billion-year-old process of stars caught in a cycle of collapsing, re-forming and collapsing again, said the former director of the Vatican Observatory.

Over time “there has been a continuous transformation of energy (in the universe) into ever-more-complex forms of material,” said U.S. Jesuit Father George Coyne.

Stars are thermonuclear ovens that will eventually collapse, disperse into gaseous clouds, then re-form, he said. These violent chemical processes created the conditions necessary to turn the few simple atoms from the big bang into the complex molecules and elements, like carbon, needed for the building blocks of life, he said.

Father Coyne was one of three astronomers who spoke at a June 24 conference sponsored by the Vatican Observatory and the Pontifical Council for Culture.

The conference came on the sidelines of an international congress the observatory was hosting outside Rome June 22-26 to focus on the ways astronomy could be a common ground for dialogue among cultures.

Both events were part of the Vatican’s many initiatives celebrating the International Year of Astronomy.

The sun in earth’s solar system is a third-generational star, he said, which means it has gone through a process of birth, death, rebirth, death and rebirth.

“If this process hadn’t happened in the universe, we wouldn’t be here,” he said.

“It’s a scientific fact that in order to have sufficient chemical abundance for life, you need three generations of stars in order to create enough carbon” and other elements needed for life, he said.

“We are literally born from the stars,” he said, adding, “We are the children of three generations of stars.”

According to scientific estimates, he said, the universe today is 13.7 billion years old and is made up of 10,000-billion-billion stars. The sun is predicted to explode again in another 6 billion years.

To show how recently human life has emerged, Father Coyne converted the age of the universe into an earth year: If the big bang happened on New Year’s Day, then the dinosaurs appeared on Christmas Day and were extinct five days later. The first hominid appeared Dec. 31 at 10 p.m., and the first humans made their appearance 43 minutes later. According to this rescale of time, midnight represents present time today, which means Jesus was born just five seconds ago, he said.

As an astronomer Father Coyne said there is no way science can ever give an explanation as to who created the universe, but as a man of faith he knows it was God.

“It’s a wonderful God who didn’t create a washer machine or a dishwasher or a car, but created a universe that intrinsically possesses a dynamism, a creativity” that in some way participates in God’s own creativity, he said.

“God wanted to share with us his own creativity, and he still does it” today, he said.

He said that, in his opinion, God has not predetermined the future of the universe and lets the world evolve on its own.

But “God still caresses the universe, participates with it” and loves his creation, he said.