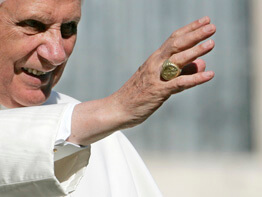 VATICAN CITY – The foundation of human rights, democracy, and cooperation among peoples and religions is threatened by a growing assumption that there are no ethical absolutes, Pope Benedict XVI said.

Not recognizing that certain ethical and moral principles are naturally part of being human has “enormous and serious consequences on the civil and social order,” Pope Benedict said in an Oct. 5 meeting with members of the International Theological Commission.

Commission members, appointed by the Vatican, have been working on a document on the foundations of natural moral law and, specifically, on how those principles form the basis of a “universal ethic” that can be recognized and shared by all peoples of all religions.

“It is not an exclusively or predominantly confessional theme,” the pope said, but is one that is important for all people and for their ability to live together in peace and mutual respect.

Pope Benedict said the commission’s report is an important part of a project being promoted by the Congregation for the Doctrine of the Faith to encourage universities, associations and individual scholars “to identify useful lines and convergences for a constructive and effective deepening of the doctrine on natural law.”

The Catholic Church teaches that natural law, whose basic norms are reflected in the Ten Commandments, is not moral and ethical principles imposed on people by religion but is rights and wrongs that are part of human nature and can be identified by the use of human reason.

Because the principles are “accessible to every rational creature,” the pope said, they are a secure basis for dialogue and cooperation among all peoples and for the building of societies in which human dignity and freedom are protected.

Unfortunately, Pope Benedict said, modern societies have lost sight of natural law and too many people are convinced that society or the majority of a society’s citizens is “the ultimate source of civil law.”

“Then the problem becomes not the search for what is good, but for power or rather the balance of powers,” he said.

“At the root of this tendency lies ethical relativism, which some people even see as one of the principal conditions of democracy because relativism would guarantee tolerance and mutual respect,” the pope said.

However, Pope Benedict said, history has demonstrated repeatedly that the majority can be wrong and that only reason and openness to perennial moral principles can guarantee a just society.

“When the fundamental needs of the dignity of the human person, human life, the institution of the family and equity in the social order – that is, basic human rights – are in play, no man-made law can subvert the norms written by the creator in human hearts without society itself being dramatically attacked in what constitutes its necessary basis,” the pope said.

Natural law, he said, is “the true guarantee offered to everyone” so they can live in freedom, have their dignity respected and not be manipulated or exploited by the more powerful.

Pope Benedict said there is a need “to mobilize the consciences of all people of good will,” whether or not they are Christians, so that natural law is recognized as the only certain basis for regulating social life.

The pope also congratulated members of the theological commission on their document, “The Hope of Salvation for Infants Who Die Without Being Baptized,” which was published in April.

The document, which emphasized the importance of baptism as the ordinary means of salvation, said the traditional concept of limbo – as a place where unbaptized infants spend eternity in happiness but without communion with God – seemed to reflect an “unduly restrictive view of salvation.”

Pope Benedict told commission members, “I trust that the document may be a useful point of reference for church pastors and theologians, and also a help and source of consolation for faithful whose families have suffered the unexpected death of a baby before it could receive the cleansing of regeneration” brought by sacramental baptism.