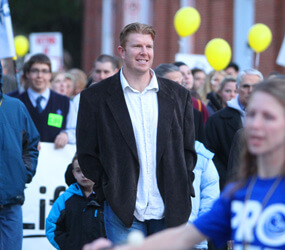 Then, the godfather of one of Birk’s five children opened a pro-life pregnancy resource center across the street from the clinic. People of faith began praying regularly for women and their unborn children – participating in sidewalk counseling and providing help for women to bring their children to term. Adrianna, Birk’s wife, volunteered at the center.

Thanks to their efforts, the abortion clinic closed.

For Birk, a six-time Pro Bowl center who has not missed a game during his two seasons in Baltimore, the episode demonstrated the power of prayer and pro-life outreach. It confirmed his longtime support for the pro-life cause.

Birk was a featured speaker at the Maryland March for Life, held March 14 in Annapolis. In his talk and in an interview with The Catholic Review, the 34-year-old Harvard alum said his Catholic faith and his own fatherhood are two main reasons he is pro-life. He remembered being overwhelmed when he held his first newborn child in his arms.

“It was unbelievable the love that I felt for her,” he said, “and any parent knows exactly what I’m talking about. At that point, you know it’s not a choice. Life is a gift that’s given to us. We are supposed to accept it. It’s not our choice whether we decide a baby lives or not.”

Birk, who attends Mass at Sacred Heart in Glyndon and the Catholic Community of St. Francis Xavier in Hunt Valley, said he has “done a lot of cool things” in his life, but participating in the March for Life is “one of the coolest things I’ve done.” It even beats running onto the field at M&T Bank Stadium, he said.

While he has walked in many pro-life marches in Minnesota when he attended Catholic school, the Maryland march was a first for the former Viking.

“It seems like our society and media want to push pro-lifers to the side and hope that we would shut our mouths and go away quietly,” said Birk, whose 6’4’’, 310-pound frame struck a distinct figure among the hundreds of marchers who filed through downtown streets. “Let’s not do that.”

Birk urged marchers to pray not only for women who are seeking abortions or who have undergone the procedure, but for the people who work in clinics where abortions are performed.

“We all need saving,” he said, “and there’s one thing that can save us all, and that’s prayer.”

The professional athlete, who established Matt Birk’s HIKE Foundation to provide educational opportunities for at-risk Baltimore students, told The Catholic Review he was impressed by the passion pro-lifers bring to their cause. He was “uplifted” to be a part of the march, he said.

“I don’t think I’m a superstar by any means,” Birk said, “but I’m glad (for) the platform that football allows me. I’m glad to use it to support causes that I passionately believe in and this is one of them. For me, it comes down to what’s right and what’s wrong – what’s God’s will and what’s not.”

For a full report on the March for Life click here.