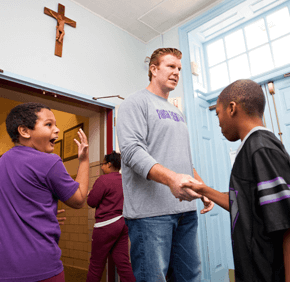 By Elizabeth Lowe
elowe@CatholicReview.org
Twitter: @ReviewLowe
CATONSVILLE – Ravens center Matt Birk, who visited St. Mark School Feb. 22 directly before he announced his retirement from the NFL, paused in one of the school’s hallways to admire student artwork hanging on a wall.
Birk – the father of six children – smiled broadly as he looked at the artwork, then walked into a third grade classroom and asked the students “What are you guys working on today?”
Birk, a member of the 2013 Super Bowl champion Baltimore Ravens, visited kindergarten through third grade classrooms and spoke to St. Mark students in grades four to eight.
The students earned his visit after raising nearly $3,500 for The Leukemia and Lymphoma Society’s Maryland Chapter.
Doug Miller, the Ravens’ chiropractor, is a parishioner of St. Mark and a lymphoma survivor. Last year, he challenged students at St. Mark and eight other schools, public and private in Baltimore and Howard counties, to raise money for the society, said Trish Miller, Doug’s wife.
The St. Mark community raised the most money.
“It takes an entire village to do anything,” Trish Miller said.
Birk spoke to the older students in St. Mark’s sanctuary about his Catholic faith, a mission trip to Guatemala he went on in high school and the importance of service.
“What you guys did with raising money with Dr. Miller’s campaign is fantastic,” Birk said, wearing a long-sleeve gray T-shirt, jeans and black sneakers. “I really want to encourage you to continue down that road of service. It will allow you to grow in your faith and closer to God.”
He continued, “Everyone here is very fortunate. You get to go to a fantastic school. God has blessed you and he wants you to do something with those blessings.”
Birk also spoke to students about his Catholic schooling.
“I am so grateful that my Catholic parents instilled the Catholic faith in me and sent me to a Catholic school,” he said.

To view the slideshow, navigate the arrows below:

Birk called winning the Super Bowl “a great moment.”
“Weeks after the Super Bowl, I’m still giving thanks to God when I say my prayers at night,” Birk said. “We’re (the Ravens) able to grow as a team … because our team has greater aspirations than just winning the Super Bowl. We want to be Godly men.”
He fielded questions from students, ranging from how it feels to be a Super Bowl champion to his favorite teams to play to how much it hurts when he’s tackled.
However, Birk said the best part of his job is that “I get to be out in the community a lot, as much as I want. That’s what my faith tells me to do. I’ve been really blessed.”
Fourth-grader Anthony Morea, who was dressed in head-to-toe Ravens gear, said it was “cool” that Birk came to St. Mark because “not all the other football players go out to other schools and talk about their faith.”
Anthony was inspired by Birk and his faith.
“If he can go out and do great things, maybe I can, too,” Anthony said.
Second-grader Emma Walsh – who wore a Ravens jersey and purple shoes – said Birk’s visit “was like a dream come true.”
When asked about his retirement, Birk, who spoke to the Catholic Review, first thanked God.
“God’s been good to us,” Birk said. “To play 15 years in the NFL is very improbable. I’m just filled with a lot of gratefulness and a lot of love.”
He continued, “15 years, it’s a long time, but it flew by. Today, it’s all good. I can’t complain about anything.”
Birk said he enjoyed the 11 years he played for the Minnesota Vikings – his hometown team – before the Ravens.
Birk said his faith has grown during his NFL career. He praised the league for offering Catholic Masses and other religious services to players and coaches.
“There’s not a lot of work places that have the resources available,” said Birk, who added that with the Ravens, talking about faith “is encouraged” and that in the Ravens locker room, head coach John Harbaugh reads Bible verses to the team.
“There is a high spiritual element,” Birk said. “God is very present.”
Father Christopher J. Whatley, pastor of St. Mark in Catonsville and the Ravens’ Catholic chaplain since 2008, said Birk has been one of up to 20 Ravens players and coaches who attend Mass before home games.
Birk said to Father Whatley that “the worst part of me retiring is you’ve got to find a new reader at Mass.”
“He’s a man of prayer, which in turn makes him a great husband and father,” Father Whatley said. “He has never let his fame interfere with his faith. What you see if what you get – a real solid citizen.”
Also see:
Baltimore Ravens fans fill the city with purple to welcome home Super Bowl champs
Catholic chaplain to the Ravens describes spiritual team
Harbaugh parents brace for ‘thrill of victory,’ ‘agony of defeat’
Copyright (c) Feb. 22, 2013 CatholicReview.org
PrevNext