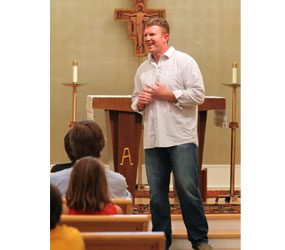 Baltimore Ravens center Matt Birk has been taking time to reach out to Baltimore Catholics. On April 10, he spoke to teens from his parish of The Catholic Community of St. Francis Xavier in Hunt Valley.

He spoke about his strong Catholic upbringing in St. Paul, Minn., noting that his father had studied to be a priest. He “never, ever missed a Sunday Mass,” he told the youths.

The Harvard grad said there came a point where he shut out God for eight years, letting the world around him tell him who he should be. Key turning points in his life, such as the birth of his first child and attending his first Bible study while playing for the Minnesota Vikings helped him change his ways.

Birk told the young people not to be afraid to stand up for their faith. He challenged them to do the readings and ask questions about faith. He encouraged them not to stray from the church during their college years.