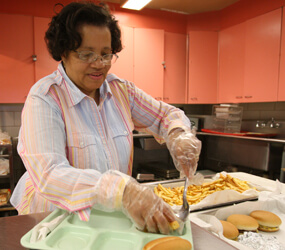 It all started when Tanya C. Terry saw a flyer from Holy Family School in Randallstown asking for volunteers. The Holy Family parishioner had a granddaughter in first grade, so she decided to step up and help out.

Six years later, “Miss Terry” is a Wednesday mainstay at the small school on Liberty Road. She volunteers in the cafeteria – helping cook meals, fill ketchup containers, prepare trays, serve food, assist students with their lunches and clean up when everyone is finished.

“I like helping out, and I like the camaraderie in the kitchen,” said the 62-year-old grandmother. “It can get hectic sometimes – especially if the classes come a little early and one grade piles up on top of another. But there’s another volunteer on Wednesday and we do okay.”

Terry said she loves being able to see how students develop from year to year – especially her granddaughter, sixth-grader Ashley DeShields.

Her familiar school presence has gained her some celebrity.

“A couple of times when I was in the mall, kids would see me,” Terry said with a laugh. “They’d say, ‘Aww! There’s the lady from the cafeteria!’”

Being involved in the school has strengthened her faith, Terry said.

“It’s gotten me back to going to church a little more regularly than I used to,” she said.

“Whenever you turn around, she’s helping out,” he said. “She’s always a friendly face. She’s one of those people you can always count on – and that means a lot. It’s nice to have that kind of presence.”