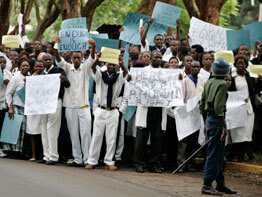 CAPE TOWN, South Africa – As world health professionals urged an international response to a public health crisis in Zimbabwe, where state hospitals are barely functioning and more than a million people are at risk, a Jesuit priest working in the country told of the effects on ordinary citizens.

“Unless the United Nations and individual governments provide a robust and immediate response, massive loss of life will occur,” the international advocacy group Physicians for Human Rights said in a Nov. 19 statement. It spoke of “the convergence of hospital closings, disruption of water and electricity, a major cholera epidemic spreading throughout the country, a breakdown in delivery of medications for HIV/AIDS, tuberculosis, malaria and chronic illness, and government obstruction of food and critical aid to millions.”

Doctors Without Borders, which has set up cholera treatment centers in Harare, warned Nov. 18 that up to 1.4 million people are in danger if the disease continues to spread.

Jesuit Father Oscar Wermter, who visited one of the centers Nov. 14, said most of its patients are from areas in the city that have been without water for more than three months.

“People have been digging wells for water, which has become mixed with sewage,” he said in a Nov. 19 telephone interview from Harare.

A teenage boy in his parish died of cholera in early November, and before Mass Nov. 16 “the chairman of the parish council asked me if we could have the greeting of peace without shaking hands,” said Father Wermter, who runs the Jesuit communications office in Harare.

“There is an acute awareness of the danger of infection,” he said.

Physicians for Human Rights, based in Cambridge, Mass., said daily death tolls from cholera “are on the rise” and “fresh water is no longer pumped into urban areas, which will only exacerbate the spread of this infectious disease caused by contaminated water.”

Noting that Zimbabwe public health workers Nov. 17 called for an urgent response to the situation, the physicians group said that, through the United Nations, the international community should “step in urgently to replace the life-saving functions of a health system that has totally collapsed.”

“Given the continued gross negligence of the government of Zimbabwe and the callous disregard for the safety and well-being of its citizens, together with the dire signs of impending lethal epidemic disease,” the organization called on the world’s governments to “act with the utmost urgency to assure that a responsive, legitimate government is in place that can protect the lives and health of the people of Zimbabwe.”

Public health workers in Harare report that, due to lack of medicine, equipment, services and staff, public hospitals and clinics “are essentially closed, resulting in preventable deaths,” the statement said, noting that “there is no access to care for those who cannot afford private clinics.”

The economic meltdown in Zimbabwe, which has the world’s highest inflation rate, has led to chronic shortages of food and gasoline and daily outages of power and water.

According to The Associated Press, riot police forcefully dispersed doctors and nurses who assembled at a Harare public hospital Nov. 18 to protest poor salaries and working conditions.

The protesters, who had planned to present a petition to the government demanding that it address the health system crisis, “were attacked by riot police and some were severely injured,” Father Wermter said.

Among the “tragedies caused by the lack of medicines” in the country is that HIV-positive Zimbabweans “have had to disrupt their antiretroviral treatment,” a disruption “which is often fatal,” he said.

Hopes of an end to the country’s political crisis were raised when President Robert Mugabe, who has ruled for 28 years, signed a power-sharing agreement with the opposition in September, but little progress has been made in setting up a unity government.