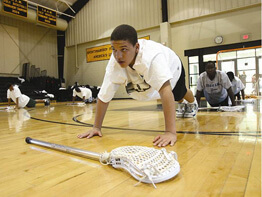 According to U.S. Lacrosse, America’s first sport is rapidly becoming one of its favorite sports and the growth shows no signs of slowing. Adding to those statistics is St. Frances Academy, Baltimore, with the start of their boys’ lacrosse program.

Head coach Rev. Derrick Truesdale, a former lacrosse player himself, is now steadily focused on teaching his players the basics of the game, securing equipment, confirming scrimmages and continuing to draw players from the student body.

The genesis of this first-year, club-level sport has been on the fast-track. Under the direction of athletic director Jerome Shelton, members of St. Frances’ faculty, community leaders and local lacrosse advocates gathered in a roundtable discussion to put all of the pieces in place.

“The thing that struck me about St. Frances in my first visit to the school for one of my son’s basketball games wasn’t the great tradition that they have in basketball or the beautiful new gym that they play in or how much they schooled our team in the game,” said Danko. “It was the kids that I met and talked to in between the quarters and before and after the game. They are making a huge impact at St. Frances Academy, and they have great kids.”

Coach Truesdale echoes Danko’s sentiments, “So many people have stepped up to make this happen, and I would do anything to help kids outside of the classroom.”

The team began small with seven initial members, but it has grown significantly to 25 boys on the team, none of whom are basketball players. Coach Truesdale is fully supported by the school’s administration and two dedicated assistants, Eric West and Phil Seaton. West works with the attackmen, and Seaton works the defense and goalie along with Truesdale.

With funding in place, equipment en route and a home field confirmed, the Panthers are working hard on the fundamentals of the game everyday after school. There’s a lot to learn, and local college teams, along with the Walbrook High School team, have come forward to host clinics, scrimmages and teaching sessions.

For the St. Frances Panthers inaugural season, the team is looking to two top senior co-captains, Adam Ford and Andre Irving; the two co-captains will serve as defensemen this season.

“God has truly blessed these students and their families with a school that really cares about them and their future,” said Danko.

Danko went on to say that, “Lacrosse, like any sport, offers young folks the opportunity to learn how to set goals, develop a work ethic and build relationships. Lacrosse people are very close, and we hope that it’s only a matter of time before lacrosse at St. Frances spills over into the surrounding community and recreation councils, creating opportunities for many other young boys and girls in Baltimore City.”

As a school community and in the tradition of the Oblate Sisters, St. Frances Academy prides itself on the belief that providence provides. Indeed, the start of this lacrosse program is a clear indicator that God fulfills his promises.