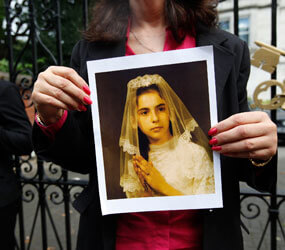 LONDON – Leaders of a coalition of groups planning to protest publicly against Pope Benedict XVI’s visit to Britain have given assurances that they do not intend to disrupt any papal ceremonies during the four-day tour.

Members of the Protest the Pope coalition told Archbishop Peter Smith of Southwark that they do not intend to demonstrate at any public events during the Sept. 16-19 papal visit to England and Scotland.

But at a Sept. 8 meeting between the archbishop and coalition leaders at New Scotland Yard, the headquarters of London’s Metropolitan Police Service, they also refused to rule out the possibility that some protesters might take it upon themselves to cause a disturbance whenever the pope appears in public.

“The archbishop’s fear of unruly demonstrations by the Protest the Pope campaign is ill-founded,” said gay rights activist Peter Tatchell, a leading member of the coalition, after the meeting.

“We plan no disruptions,” he said. “We reiterated to Archbishop Smith that we have always been committed to peaceful, lawful protests. He accepted our assurances.”

Archbishop Smith, whose archdiocese covers London south of the Thames River, told Catholic News Service Sept. 8 that the police had called the meeting in an attempt to “remove misunderstandings.” He said the parties had a “frank but civilized discussion.”

“What pleased me very much and gave me very great relief was that they had no intention of disrupting any of the ceremonies – but they will be very, very vocal about the issues they are concerned about,” he said.

The archbishop said he told the coalition leaders that he had no objections to free expression of opinions as long as they were made respectfully and with dignity.

“They (the leaders) said they couldn’t guarantee that some lunatic might not attach themselves to some of their events,” he added. “But to be fair to them, nobody can guarantee that you are not going to get crackpots and lunatics tagging on to these things and acting individually.”

The coalition has stirred up opposition to the papal visit through the British media, primarily through challenging the 10 million-pound ($15.4 million) cost to the taxpayer. A further 10 million pounds will be paid by the Catholic Church in England, Wales and Scotland.

In the days before the visit, the coalition will hold a “Nope to the Pope” party, a comedy night and a film festival.

Members then plan several protests during the papal visit.

The protesters say they object principally to the designation of the tour as a publicly funded state visit and to aspects of Catholic teaching on such matters as sexuality, AIDS prevention, and the ordination of women.

They also are demanding that Pope Benedict hand over all the Vatican files on clerical sex offenders to police forces around the world.

“Keeping these files secret is wrong and collusion with criminal acts,” said Tatchell after the meeting.

Archbishop Smith said he would “report back” the concerns raised by the coalition to his fellow bishops.