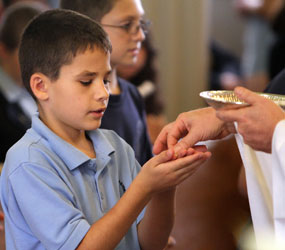 WASHINGTON – Promoting Catholic identity in Catholic high schools and elementary schools is not just a good thing to do but a necessary action for survival, according to speakers at conference in Washington for Catholic school leaders.

The speakers noted candidly that the participants in the Oct. 2-4 conference at The Catholic University of America knew full well the challenges currently facing Catholic schools such as dwindling enrollments, rising expenses, and closures or threats to close.

But speakers at the “Catholic Identity of Catholic Elementary and Secondary Schools” conference also noted that these diocesan superintendents, college professors, high school principals and education researchers also are fully aware that Catholic schools have something unique to offer students that extends far beyond quality academics or even a faith-based education.

Bishop David M. O’Connell of Trenton, N.J., and former president of Catholic University, stressed that the mission of Catholic schools is to “proclaim the good news” and provide a “place to encounter God.”

This has not changed, he said, “since Jesus told his disciples to go and teach all nations.”

The bishop stressed that the mission or Catholic identity aspect of Catholic schools is “not a mere add on” but something that is fundamental to their very existence and sets them apart from other schools.

If Catholic schools aren’t inspiring, engaging and changing lives, he said, they are “simply schools, that’s all.” Instead, they need to be places of learning that are “willing to educate and transmit faith in ways that are unambiguous.”

Bishop O’Connell noted that this kind of dedication isn’t just for religion classes either, but something that needs to take place throughout the curriculum, on the playground, and in faculty and parent meetings. He said teachers and administrators set this tone and thus advised school administrators to hire teachers who believe in the school’s mission and to follow up with faith formation training programs and support to these teachers during the year.

He also said bishops should be visiting the schools in their dioceses to make sure the “faith-oriented needs are met” and should make the decision to close a school only as a last resort.

During a question-and-answer session, the bishop was asked what schools could do when the Catholic identity that they highlight doesn’t seem to be something parents necessarily want.

The bishop responded by saying priests and other Catholic leaders need to “be shameless about promoting Catholic education.”

College leaders who spoke at the conference sponsored by Catholic University and St. John’s University in Queens, N.Y., said they saw the link between the work of Catholic higher education and Catholic elementary and secondary schools.

There is a “kinship between our enterprises,” said John Garvey, president of Catholic University, who noted that all Catholics schools not only share the same mission but face the same challenges including the decline in the number of religious and the rising influence of secular trends.

Vincentian Father Donald Harrington, president of St. John’s University, noted that “for too long there has been a great divide between Catholic higher education and elementary and secondary schools.”He said “great things will happen” when these groups cooperate especially since they “share the sacred trust of educating young people.”

Father Harrington noted that Catholic college leaders have thought long and hard about Catholic identity through their work in implementing “Ex Corde Ecclesiae,” an apostolic constitution issued by Pope John Paul II that identifies the mission of Catholic higher education.

He said Catholic colleges should share their resources with their younger counterparts, “not out of charity but from the belief that this is important” and to “do all we can to support and continue Catholic education.”