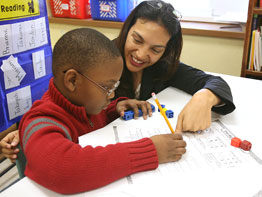 What do they have to do with each other? Enter the College of Notre Dame of Maryland, Baltimore, the centerpiece of an innovative program to equip teachers from Panama with a master’s degree in special education by way of a two-year commitment to city schools.

In November, they travel to the college’s Baltimore campus to student teach in the morning in city schools and attend afternoon classes at the college. The city picks up their tuition, books, and room and board and provides a stipend and health insurance. At the end of the one-year program in May, they’ll have a master’s degree and be certified in special education.

In return, they teach for two years in the city schools.

The city needed special education teachers who were fluent in Spanish, said Sister Sharon Sleara, S.S.N.D., Ph.D., dean of education at the College of Notre Dame. The students from Panama are able to communicate easily with Hispanic parents.

Students also must also have a bachelor’s degree to enter the program, which is in its first year. Many of them are teachers in Panama.

Daniel Alveo, a clinical psychologist from Panama, is one of 23 students in the program.

“Because I was in psychology, I was very interested in special education,” he said. “If you are dyslexic in Panama, most likely you will go your whole life without being diagnosed. We don’t have any special education. When I go back to Panama, maybe I can open a school.”

He said that children with physical disabilities, such as cerebral palsy or blindness, are in separate schools, but the child who is physically healthy but has learning issues is simply lost.

“I was interested in learning a lot more about education, and then I saw this program, which was a good opportunity for me,” Mr. Alveo said. “It was a combination of instruction but also practice.”

Living in another country is not new for him; he was an exchange student for a year in Belgium and also speaks French.

So far, he likes Baltimore, although he confesses to being frustrated by the mass transit system.

“Americans here in Baltimore City are very open; if you need help they will offer it willingly,” he said.

Sister Sharon said the program, which will continue next year, grew out of talks the college was having with the Panama university about teaching English there.