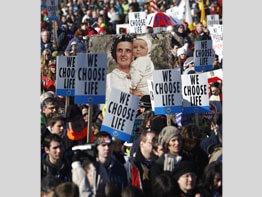 WASHINGTON – Two days after millions of Americans converged on the National Mall in Washington to witness the inauguration of President Barack Obama, tens of thousands of sign-carrying citizens marched, chanted, sang and shouted in the same spot, loud enough – they hoped – for the nation’s new leader to hear their plea to outlaw abortion.

As pro-life activists and members of the U.S. Congress delivered anti-abortion speeches with the Capitol in the background, citizens carried signs that read “Mr. President, please save the children,” and “Obama, stop the baby war: Abortion,” during the Jan. 22 March for Life 2009.

The march was held on the 36th anniversary of the U.S. Supreme Court’s 1973 Roe v. Wade decision legalizing abortion.

The same day the Supreme Court ruled on the Roe case, it also handed down the companion decision Doe v. Bolton. Together, Roe and Doe recognized abortion as a constitutional right and overturned state laws banning the procedure.

“I know Barack Obama is very pro-abortion,” said Paul Thorn, 61, a parishioner of St. Mary of the Hills Church in Rochester Hills, Mich., who traveled to Washington with his wife and members of the Knights of Columbus of Michigan to take part in the event.

“In his inauguration address, President Obama said Americans have the right to life, liberty and the pursuit of happiness. So, maybe he is coming around to the right side of the abortion issue. Maybe he is hearing us now,” Thorn told Catholic News Service.

In a Jan. 22 statement, President Obama said he is “committed to protecting a woman’s right to choose,” but he also wants to find a way to reduce the number of abortions performed in the U.S. each year.

“While this is a sensitive and often divisive issue, no matter what our views, we are united in our determination to prevent unintended pregnancies, reduce the need for abortion, and support women and families in the choices they make,” he said.

“To accomplish these goals, we must work to find common ground to expand access to affordable contraception, accurate health information and preventative services,” he added.

For President Obama “to achieve the status quo is unacceptable. We need to put a stop to all abortions,” said Shaun Kenny, executive director of the American Life League, based in Stafford, Va.

Mr. Kenny and his group were scheduled to hold a conference on personhood Jan. 23 at a hotel on Capitol Hill, followed by an evening concert sponsored by Students for Life of America and featuring BarlowGirl, a Christian rock band, and Laura Ingraham, a radio host and political commentator.

The conference’s objective was to provide training and activism for a grass-roots movement promoting a personhood amendment in a number of states that would grant constitutional protections to every fertilized egg, essentially making abortion illegal, Mr. Kenny told CNS.

“It’s our goal to galvanize people to get these proposed amendments on the ballots of as many states as possible,” he said. “This would basically end the abortion debate, the last chapter of the civil rights movement.”

A few people on the sidelines didn’t agree with the message of March for Life 2009, as they held up their signs demanding a need to “preserve reproductive rights for women.”

House Speaker Nancy Pelosi, a Catholic member of Congress from San Francisco and Baltimore native, issued a statement Jan. 22 asserting her continued support for keeping abortion legal in the U.S.

“I will work with President Obama, as I have worked throughout my entire career, to ensure a woman’s right to choose,” Rep. Pelosi said. “That is because decisions about whether to have a child do not and should not rest with the government. We believe a woman – in consultation with her family, her physician and her faith – is best qualified to make that decision.”

Kathy Myers, 58, of West Chester, Pa., vigorously disagreed with Rep. Pelosi’s opinion as she cheered on the anti-abortion speakers.

Myers said she was taking her fellow parishioners of St. Peter and Paul Church up to Capitol Hill after the rally to “talk some sense” into as many members of Congress as they could visit.

“It’s important that we are here to send a message to people who don’t already know our message,” said Les Simon, 18, a parishioner of St. Joseph Church in Sykesville, Md. “Then it’s important for us to take what we’ve learned here, and spread the word back home to as many people as we can. There is power in numbers, and our elected officials know it.”