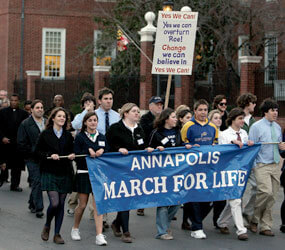 The pro-life movement has taken it on the chin in the last two months, but you wouldn’t know it from the optimism that 1,000 pro-life supporters brought to the streets of Annapolis March 9 for the 30th annual Maryland March for Life.

On the same day President Barack Obama lifted restrictions for federal funding of human embryonic stem cell research in the United States, activists from all corners of the state called on their leaders to support a culture of life from conception to natural death.

The marchers faced obstacles not seen in recent years.

The Senate Finance Committee voted down a top pro-life measure Feb. 20 that would have required abortion clinics within Anne Arundel County to provide the option of seeing sonograms prior to abortions.

Yet local pro-life leaders insisted that the tide can be turned if those in the movement rely on prayer and take a more hands-on approach to activism – lobbying lawmakers, volunteering in crisis pregnancy centers and giving money to the cause.

During his homily at a Mass at St. Mary in Annapolis preceding the march, Archbishop Edwin F. O’Brien thanked pro-life volunteers for their “boundless energy in bringing to life and keeping alive the creed that forms the core, the heart and soul of America’s identity – that all of us are created equal and endowed by our creator with the inalienable right to life.”

Speaking to a standing-room-only crowd, Archbishop O’Brien declared the battle “far from won.”

“Gradually and determinedly, a new administration has taken significant steps leading our nation away from a culture of life and instead toward a culture of death,” he said.

The archbishop noted that during the presidential campaign, President Obama promised to sign the Freedom of Choice Act. Yet to be introduced into Congress, the measure would wipe out many existing state laws restricting abortion.

Quoting Chicago Cardinal Francis George, president of the U.S. Conference of Catholic Bishops, the archbishop said the bill and policies like it would “permanently alienate tens of millions of Americans and would be seen by many as an attack on the free exercise of their religion.”

Calling for a consistent pro-life message, Archbishop O’Brien asked Catholics to join him in opposing capital punishment. The Maryland State Senate recently approved significant restrictions on the death penalty, but stopped short of the outright appeal sought by Gov.O’Malley and Maryland’s bishops. The House of Delegates Judiciary Committee has taken up the debate.

Carrying bright yellow balloons emblazoned with the message, ‘Smile, your mom chose life,’ the marchers wended their way from St. Mary’s to Lawyer’s Mall in the shadow of the State House.

Nancy Paltell, associate director for the respect life office of the Maryland Catholic Conference, told the throng of marchers that rallying in Annapolis was only their first step. She challenged them to meet with their lawmakers and appealed for more support for pregnancy resource centers.

Ms. Paltell said the reason important pro-life legislation constantly fails in Annapolis is that not enough pro-life advocates speak up.

Now is the time to start lobbying for the sonogram bill that would require abortion clinics to give women the option of seeing a sonogram image before having an abortion, Ms. Paltell said.

“What a sonogram does is shine the light on the evil of the abortion industry,” said Ms. Paltell, noting that several states already have sonogram laws on the books. “It helps her crystallize in her mind what she already knows in her heart: that there’s a baby in there.”

Daryl Bruner, a parishioner of St. Joseph in Taneytown who marched for the second year in a row, said he was encouraged by the large number of participants. March organizers said this year’s event was the biggest in recent years, attracting twice the attendance of last year.

“I think, in the days ahead, with the large number of people that are here, we can’t be brushed aside,” Mr. Bruner said.

Debbie Dauses-Smith, a parishioner of St. Mary in Annapolis, said she hopes lawmakers will “finally get it.”