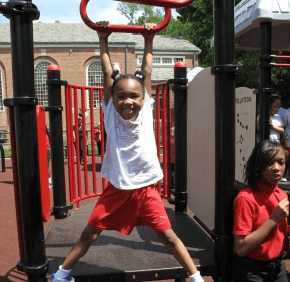 While the kids clambered around on the monkey bars, suspension bridge, seesaws and ladders of the new playground at Cardinal Shehan School, the adults marveled at the squishy rubber floor underneath it all.

“If they fall off, they won’t have a bump or a scratch, I don’t think,” said Betty Contino, chair of the Women’s Education Alliance, which spearheaded the construction of the playground as well as a basketball court at the pre-K-8 school which serves the communities of St. Matthew in Northwood and St. Thomas More in Baltimore.

Baltimore Archbishop William E. Lori dedicated and blessed the playground and the basketball court in a May 26 ceremony attended by donors and punctuated by musical performances by students.

“We’re talking a lot these days about our beloved city of Baltimore, and we’re looking for things to help our young people develop their God-given potential,” the archbishop said. “Cardinal Shehan School is one of those things making our community better. Am I right?”

Carroll and Ellie Nordhoff, Jeffrey and Michele Matton, and the Contino Family Foundation provided funding for the playground. Herb Schafer’s Quality Asphalt Pavements surfaced the area for the basketball court, which was graded by Merritt Properties, which also provided the backboard, hoop and fencing.

Oblate Sister of Providence Rita Michelle Proctor called the new play facilities “a monument to what people can and are willing to do for our children.”

She added that the playground and basketball court are “just another means to encourage our children to be physically active” in sync with First Lady Michelle Obama’s Let’s Move initiative.

She was moved to tears when the donors presented her with a plaque that revealed the facility’s official name: The Sister Rita Michelle Proctor Playground.

Contino said that the idea for the playground and basketball court came out of “dreaming,” followed by serendipity.

“All of a sudden, donors presented themselves,” she said.

The Women’s Education Alliance is a group of women from Baltimore and the surrounding counties that provides scholarships for children who attend one of the Archdiocese of Baltimore’s four Catholic Community Schools – Cardinal Shehan, Archbishop Borders School, Ss. James and John Catholic School and Holy Angels Catholic School, all located in Baltimore and serving economically disadvantaged families.

“Kids want to have fun, too,” Contino said, explaining her group’s foray into outdoor play facilities. “We already provide a great academic and transformational experience indoors. Now, we’re trying to bring some of that energy outside.”

Students from Cardinal Shehan School perform at the dedication of their new playground and basketball court.
(Erik Zygmont/CR Staff)