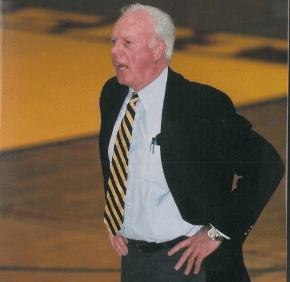 None focused on Loyola Blakefield basketball or the Baltimore Catholic League, two institutions elevated by Savage. Father Whatley chose instead to linger on the strength of Savage’s grace, marriage of 51 years and selfless faith.

Savage died May 23, six days after his 77th birthday and three months after he suffered a stroke while keeping score at the 44th annual BCL tournament. He had served Loyola Blakefield as athletic director and basketball coach, the latter from 1968 to 2003, and was instrumental in the 1971 formation of the BCL.

His funeral Mass was offered May 28 at St. Mark in Catonsville, where Father Whatley, the pastor, is a family friend and former colleague, having been on staff at Loyola Blakefield from 1977 to 1986.

“Jerry preached, but he didn’t use words,” Father Whatley said in his homily, referencing St. Francis of Assisi’s directive and recalling Savage’s response to the drowning of a Blakefield student, Clarence Braye (‘81), at nearby Patapsco Valley State Park.

“I drove to the site where they were recovering the body, and here came Jerry, with that bouncing gait of his, out of the woods,” Father Whatley said. “We were both grief-stricken, waited for hours, but Clarence’s mother had pled with us, ‘don’t let them leave him in the water.’

“Both of us were lamenting the loss of a young man heading to Tulane University when I asked, ‘What is God up to?’ Jerry said, ‘He has a plan.’ “He (God) had a plan for Jerry.”

Savage’s first sporting love was baseball. He coached the JV at Loyola Blakefield, and Father Whatley was his assistant.

“Practice or a game would end, and I would walk across the road into (the Jesuit) community and sit down to dinner,” Father Whatley said. “Jerry lined the fields, remained at school until every student had a ride, then drove himself home where dinner was waiting for him.

“When I asked Jerry how his wife (Pat) felt about that, he said ‘You can’t believe the books she’s read.’ I can’t believe the meals she cooked. … When it comes to marriage preparation, all I have to do is share stories about Jerry and Pat.”

The two raised three sons, Jim, Michael and Kevin. To mark their 50th anniversary in the summer of 2013, Savage and his wife, who taught math at Mount St. Joseph for 23 years, had their wedding vows renewed by Father Whatley, in the chapel at St. Mark.

As to the third image of Savage, Father Whatley talked of his solemn approach to his faith, and in particular, the Eucharist.

“I would give all I have if I could know what Jerry said to God,” Father Whatley said. “He listened to Jesus Christ. Jerry never drew attention to himself after a game; he wanted the attention on his players. His entire life was a Kairos moment, ‘to be in service to another.’ ”

The pews – and altar – were packed with Loyola Blakefield alumni and staff, as well as former rival coaches and players, and Savage’s fellow parishioners from nearby St. Agnes.

His funeral Mass – and the evening wakes that preceded it – were all held at the larger St. Mark, with the approval of Father Michael Foppiano, pastor of St. Agnes. He was a concelebrant, along with Monsignor Carl Cummings, pastor emeritus of St. Agnes, and Jesuit Father Frank Moan (Loyola Blakefield ’45), a former administrator at his prep alma mater.

In remarks before Mass, Jack Degele, commissioner of the BCL, talked of watching Savage play for Mount St. Mary’s University in Emmitsburg when it was a small college power, then having him as an English teacher as a freshman at Mount St. Joseph High School in 1961, and then babysitting his oldest.

“When I got married in 1972, he was my best man,” Degele said. “He wasn’t my best friend, but I wanted to be like Jerry Savage. He loved his work, he loved his family, and he treated everyone with respect. In maturity, I witnessed a man for others.”

A eulogy before Mass was given by Savage’s brother, James. The gifts were brought by his five grand-daughters.

Pallbearers included former Loyola Blakefield players, such as Morris Cannon, a senior on the inaugural BCL tournament champions in 1972. An IT specialist for the Social Security Administration, graduate of Loyola University Maryland and 2014 BCL Hall of Fame inductee, Cannon was asked which lessons imparted by Savage stuck.

“Do the right thing consistently, and good things will happen” he said. “Like everyone else here, I am blessed to have known Jerry. I am the person I am today due in part to Jerry’s guidance.”