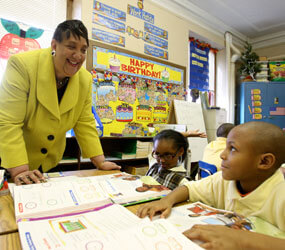 When La Uanah King-Cassell applied to become the principal of Ss. James and John School in East Baltimore, the 28-year-old teacher really wasn’t expecting to get the job.

“I thought it would be good just to get the experience of an interview,” King-Cassell remembered with a laugh.

Not only was King-Cassell named the principal, she held onto the post for nearly three decades.

Now one of the longest-serving administrators in the Archdiocese of Baltimore, the 56-year-old parishioner of Holy Comforter-St. Cyprian in Washington, D.C. said there’s no other place she’d rather be than serving the children of inner-city Baltimore. She has had several lucrative offers to go elsewhere, but she rejected them all.

“My whole life has been dedicated to trying to make a difference,” said King-Cassell, who grew up in inner-city Washington. “I want kids in the city to see there’s a world for them to explore and that the way they get to that world is education. It’s like a passion for me – a calling.”

Ss. James and John is one of the oldest Catholic schools in the Archdiocese of Baltimore. It serves a largely black, non-Catholic population – many of whom come from some of the toughest parts of the city.

As part of the archdiocese’s strategic plan for strengthening Catholic education, Ss. James and John added a middle school this year. The former elementary school absorbed students from the now-closed St. Katharine Middle School. There are currently 291 students enrolled in pre-K through 8 – about 60 more than last year.

“Our goals are very high – especially with the middle school,” King-Cassell said. “We are already planning college tours so we can get students thinking about college early on. It’s that important.”

The principal, who is completing a doctorate in education from the University of Maryland, College Park, spends a lot of time sitting in on classes at Ss. James and John. She is especially passionate about making sure the math and science programs are challenging.

“You will rarely find me in the office,” she said. “I think a principal who stays in the office is really missing a lot. The action in is the classroom.”

King-Cassell’s long-term goals for the school include expanding to include a double track for every grade, strengthening outreach to gifted students and building a multipurpose facility that would include a gymnasium and meeting space.

“We are a community school,” King-Cassell said. “Our goal is not only to have a new facility for the school, but to open it up for other purposes in the community.”

King-Cassell said the students of Ss. James and John have been a blessing. The highlight of her tenure came in 2001, she said, when war victims from Sierra Leone visited Ss. James and John to thank the school children for their support. Ss. James and John students raised $3,000 in pennies to help fly several maimed children from West Africa to the United States, where they received prosthetic limbs.

“Here we are – this little inner-city school in Baltimore – and we raise this money that really made a difference,” King-Cassell remembered. “It showed our students that there’s a bigger world than East Baltimore.”

The students have gone on to raise additional money over the years for Sierra Leone war victims. Several students have also traveled to Washington to witness hearings before the Africa Subcommittee of the House International Relations Committee and to testify in favor of more U.S. aid for war victims. The school has also raised money to help Haiti.

“Ss. James and John is a beacon of hope for the community,” King-Cassell said. “I feel truly blessed to have the opportunity to do something in life that I really enjoy.”