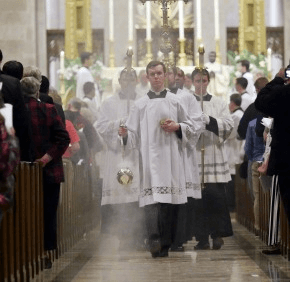 By Erik Zygmont
ezygmont@CatholicReview.org
Twitter @ReviewErik
Peeking out from behind Carrie Joneckis’ Toyota Land Cruiser 13-year-old Tommy George noticed some youngish men – poised and fit in their brown robes – exiting another vehicle.
“Franciscans! Franciscans!” he whispered excitedly, nudging his friend Grayson Phillips, also 13.
It was March 30, in the parking lot of the Cathedral of Mary Our Queen in Homeland. Priests, deacons, seminarians and religious from across the Archdiocese of Baltimore were arriving for the yearly Chrism Mass, at which the archbishop blesses the sacramental oils to be used throughout the archdiocese, and priests renew their vows.
For Tommy and Grayson, both working on their Ad Altare Dei (to the altar of God) emblems for the Boy Scouts, the Mass was an opportunity to see the hundreds across the archdiocese who devote themselves to religious life.
“I don’t get to do more for vocations than bringing (the boys) to something like this, where they see the beauty of the priestly vocation,” said Joneckis, religious emblems counselor at St. John the Evangelist in Severna Park.
In his homily, Archbishop William E. Lori celebrated that commitment.
“Dear brother priests,” he said, “how much all of us want to thank you for your faithful ministry, day in and day out, in season and out of season.”
To view a photo slideshow, navigate the arrows below.
If the priests themselves shared a common sentiment at the annual Mass affirming their vocation, it was “connection.”
“It’s a joyful celebration,” said Father William Franken pastor of St. Joan of Arc in Aberdeen. “It’s a time in which we have a sense of unity as a diocese, but also a sense of the priesthood being not only a special calling in the church but also a call to service in the church.”
Seminarian Jeremy Smith, whose home parish is St. Ursula in Parkville, noted that he was bumping into religious from beyond the archdiocese, such as a few members of the Missionaries of Charity in their distinctive blue-trimmed saris.
“I feel a sense of connectedness to the Holy Mother Church,” he said.
Father Charles Sokota, a Zambian priest in the U.S. to study moral theology at St. Mary’s Seminary and University, commented on the multilingual aspect of the Chrism Mass, in which the readings were in English, Spanish and sign language.
“In Zambia, it’s done as they did here, in different local languages,” he said. “I really enjoyed it.”
As he spoke about the oil of chrism, Archbishop Lori also referenced the shared connection of priests.
“Dear brother priests, every time we celebrate an ordination anniversary, and when we gather like this to renew the promises we made on ordination day, it is as if the oil of holy chrism is fresh on the palms of our hands,” he said.
Turning to the congregation, the archbishop extended the connection to all parishioners.
“This is what gets us up in the morning, and this is what makes the whole church glad,” he said.
During the liturgy, the archbishop blessed both the oils of catechumens, which will be used at the baptisms of those preparing for the sacrament through the Rite of Christian Initiation, and the oils of the sick, which will be used in the sacrament of the anointing of the sick.
He also consecrated Holy Chrism, a mixture of olive oil and balsam fragrance, that will be used to anoint the newly baptized, seal candidates for confirmation and anoint the hands of priests and the heads of bishops at their ordination. It will also be used in the rites of anointing at the dedication of churches and altars. As part of the consecration rite, the archbishop breathed over a vessel containing the chrism – calling down the Holy Spirit.
Also see:
‘Oilers’ prepare for Chrism Mass
600 teen pilgrims brave cold to ‘Walk in truth’
Western Maryland youths begin Holy Week reaching out to poor
PrevNext