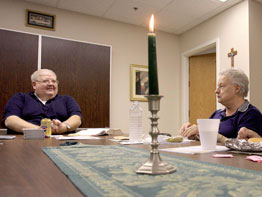 “The old story is everybody is around you through the funeral and you’re oblivious to it,” Father Smith recalled. “You leave the grave site and go to a lunch or something; then the people have to go back to their lives. In a couple of days you realize you’re alone.”

Father Smith, an associate pastor at St. Luke-St. Andrew Parish in Ocean City, in the Diocese of Wilmington, Del., was married and widowed before he entered the seminary. It’s a personal experience he brings to his priesthood that helps him understand the feelings of the members of a prayer group he started for widows this fall at St. Andrew’s.

The group also uses a prayer book for widows published by Our Sunday Visitor. The book is a big help because “there’s not much out there,” he said. “There’s nothing out there for widowers.”

Father Smith plans to begin a breakfast group for widowers in the Ocean City parish. He hopes the men will meet, talk and pray in a local restaurant.

“That might work,” he said. “It’s easier to go out and talk to a couple of guys. It’s worked in other parishes.”

Widowers are much harder to start with, Father Smith said, because men don’t want to express their feelings.

“Men tend to bottle up their grief and all that kind of stuff, except when they’re alone. I know their pain. I buried myself in my work for a year or so,” said Father Smith, who was married 14 years to his wife, Rita, before she died after a seven-year illness.

“Men, if they’re retired, they might play golf, work in the yard and then after a TV dinner, they just watch TV. They’re just existing. They sit at home and wonder why their partner died first. Men tend to isolate themselves.

“Women seem to bounce back better,” Father Smith said. “Women, at least, can gather other women together. They’ll visit with the grandchildren. It’s not that they don’t hurt. They hurt tremendously.”

That hurt from losing a spouse isn’t even fully understood by the children of the widow or widower, he said.

Because of the profound nature of the loss, Father Smith is encouraged that there are “many other priests doing similar work in the diocese” with widows and widowers.

He hopes the church incorporates such work with bereaved spouses into the “seamless garment” of its ministries of taking care of people who are sick or in nursing homes.

“It means a lot if your parish or church understands,” Father Smith said. He described how hurtful it can be when a parish sends out different signals.

“I experienced this one. You get your packet of church envelopes from your parish and it’s still addressed Mr. and Mrs.,” he said. “You sit back with the junk mail and think, ‘My God, I buried my wife from the church. Don’t they know she died? Why didn’t somebody fix this?’ Parishes must be attuned to make those little adjustments. It means a lot if your parish, your church understands.”

Margo Carrara, a parishioner of St. Luke-St. Andrew, has been a member of Father Smith’s prayer group since its first meeting. She lost her husband, Ron, in July 2006 only five months after he retired.

“In our area a lot of retired people move down here and unfortunately there’s a growing number of widows and widowers,” she said. Because many of the widowed retirees stay in the area, “I hope we get more people to come. It’s good to have someone of your faith that you can speak with, at least to share.”

Carrara, who is a sacristan at St. Luke’s and helps during funeral Masses, decided to attend the widows’ prayer group because Father Smith, as a widower, “would have the same feelings, having gone through it himself.”

The priest hopes his meetings help widows and widowers know the church understands their loss. And on Sundays, when they see each other in church, he hopes they’ll wave to each other and talk so “they can fill that void with support and strengthen each other.”