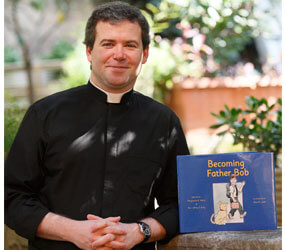 VATICAN CITY – At the Vatican, the Year for Priests is being marked with serious academic conferences and solemn liturgies, leading up to a huge gathering of priests from around the world in June.

Father Jeffrey F. Kirby, 34, a priest of the Diocese of Charleston, S.C., has participated in some of the big Vatican events, but he really marked the Year for Priests by co-authoring a children’s book.

“Becoming Father Bob” was written by Father Kirby and Marguerite B. Wirtz, principal of St. Mary Help of Christians Catholic School in Aiken, S.C. The book is illustrated by Alice Judd, a member of the parish, and was released Feb. 1.

Because the book is aimed at children in grades 4-7, the tone obviously is not as ponderous as the Year for Priests’ conferences on the theology of the priesthood and on the history, theology and spirituality of celibacy held in Rome in early March.

As a boy and as a teen, the character has a puppy and is involved in Boy Scouts. His palms sweat the first time he asks a girl out. He goes to school dances, to university, to parties and to Mass. He gets a job and continues questioning what is life is meant to be.

“Bobby is just living a normal life,” Father Kirby said in an interview in Rome. The boy in the story is following basic advice for Christian children: “Just try to be a good kid, don’t lie, treat your mom and dad well, don’t harass your brothers and sisters, pray, take care of your dog.”

“All he was doing was trying to be a good kid and through that he hears God’s call,” Father Kirby said.

The point, Father Kirby said, is that “normal people are called to the priesthood.”

“Most of us, I think, just live day in and day out and most conversions happen slowly and quietly,” he said.

Standing in the sunny garden courtyard of the Casa Santa Maria, a residence for U.S. priests studying in Rome, Father Kirby insisted he’s one of those “normal people” and that studying in Rome and attending or serving at papal liturgies was a blessing, not a goal.

“I would never have imagined this for my life and my formation for the priesthood. All I did was say, ‘yes,’ and here I am,” he said.

Father Kirby finished his seminary studies at the Pontifical North American College in Rome and was ordained in 2007. His first assignment was at St. Mary Help of Christians parish and school.

But he was sent back to Rome in September to finish his graduate degree in moral theology at the Pontifical University of the Holy Cross, so he and Wirtz wrote the book together using e-mails, faxes and phone calls.

Large swatches of Father Bob’s story come from the life of Charleston Bishop Robert E. Guglielmone, and the puppy in the book is totally based on the bishop’s dog, Mickey.

But Father Kirby said the character also includes bits and pieces of other priests’ stories, including his own. In fact, the book’s “Father Stan,” who is preparing 7th-graders for confirmation and tells them God has “a plan for them, a vocation,” is illustrated with a drawing of Father Kirby teaching at St. Mary Help of Christians.

At that point, the book says, “Bobby hoped that God’s plan for him included baseball and girls.”

Wirtz came up with the idea of writing the book after the school received a grant to buy children’s books on vocations for the school library and couldn’t find much.

Father Kirby said they plan to write at least two more children’s vocations books: one on religious life for women, to be published in February 2011, and then one on “holy matrimony – I’d like to retrieve that term to underline that it is a sacrament.”