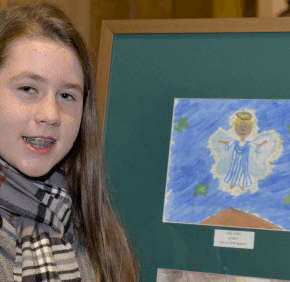 WASHINGTON – Art and faith complement one another, a priest told this year’s winners of the Christmas Artwork Contest of the Missionary Childhood Association.

“Your art has something which inspires, encourages and explains our faith. That is something special in this Year of Faith,” said Monsignor Robert Fuhrman, assistant national director of the Pontifical Mission Societies, which includes the association.

“Your art lifts us up, sacred art created with a touch of God’s hand, and yours,” he said during a Dec. 7 Mass celebrated for the winning artists at the Basilica of the National Shrine of the Immaculate Conception in Washington.

Eleven of this year’s 24 winners and their families attended the Mass.

The Missionary Childhood Association produced the first Catholic Christmas seal in the United States in 1916.

In 2005, winning art, which depicts key themes and characters from the Christmas story, became the association’s first Christmas cards, and the first Mass for winners was celebrated that year at the national shrine.

Twenty-four winners are selected annually from about 10,000 entries from children in Catholic elementary schools, religious education programs and home-schooling programs. In recent years, the winning artwork has been made available to be sent as e-greetings using the association’s website for children, http://MCAKids.org.

All winning art also is displayed at the national shrine each year during the Advent and Christmas seasons, through the Epiphany.

One “grand prize” winner is featured on the cover of the Christmas card of the national director of the Pontifical Mission Societies, Oblate Father Andrew Small.

Top honors this year went to a student from Bridgeport, Conn., seventh-grader Alison Fallon, for her drawing of a Christmas angel. She and her family attended the Dec. 7 Mass in Washington.

After Mass, each student received a World Mission Rosary, created by Archbishop Fulton J. Sheen. Now a candidate for sainthood, the archbishop was national director of the Society for the Propagation of the Faith, another of the Pontifical Mission Societies.

The rosary’s different colored beads that form each decade call to mind an area of the world where the Catholic Church continues her evangelizing mission: green for the forests and grasslands of Africa, blue for the ocean surrounding the Pacific Islands, red for the fire of faith that brought missionaries to the Americas, white symbolizing Europe, the seat of the Holy Father, and yellow, the morning light of the East, for Asia.

Archbishop Sheen often said that when the rosary was completed, one had “embraced all continents, all peoples in prayer.”

During the Year of Faith, Pope Benedict XVI has asked all Catholics to be part of a prayer movement focused on the person of Jesus Christ. According to the Missionary Childhood Association, the prayer movement is to be centered on the World Mission Rosary.

A press release from the association said the organization aims to have every Catholic elementary school student receive and pray the World Mission Rosary.

Editor’s Note: Entries the 2012-2013 Christmas Artwork Contest are now being accepted at the national office of the Missionary Childhood Association in New York. The deadline is Jan. 31. Two winners will be selected for a special book of art for the pope at the conclusion of the Year of Faith. More information is available at www.onefamilyinmission.org/hca/advent.html.