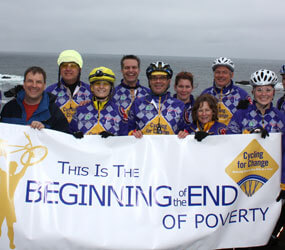 WASHINGTON – Jesuit Father Matthew Ruhl is cycling across America with a team of 11 to bring awareness to the issue of poverty and help combat it.

The Cycling for Change team is riding 5,052 miles from Cape Flattery, Wash., to Key West, Fla., to promote Catholic Charities USA’s Campaign to Reduce Poverty, a plan to cut poverty in half by 2020.

“Father Matt has three passions -–the poor, cycling and the Catholic Church. By combining these things, he hopes to bring attention to the 40 million people living in poverty in America,” said Kathie Conwell, communications and marketing manager for Catholic Charities of the Diocese of Kansas City-St. Joseph, Mo.

As of July 6, Father Ruhl, who is pastor of St. Francis Xavier Parish in Kansas City, and his team were in Fort Collins, Colo., and headed to Denver; they have covered more than 2,000 miles of their 5,052-mile ride. They began May 29 and were scheduled to end the journey Sept. 5.

“So far so good,” Father Ruhl told CNS in a recent phone interview after riding approximately 70 miles that day. Team members, who range in age from 24 to 80, average 65 miles per day. The volunteer cycling team is a group of lawyers, doctors, social workers, photographers and retirees, all of whom are dedicated to addressing the issue of poverty.

“People talk about the poor as a depressed people,” Father Ruhl said, “but the ones we have met are not depressed at all. In fact, we have seen a great deal of hope and realized that they are not naturally despondent.”

Catholic Charities and the local parishes in the towns where the team stops organize events for them to attend. Father Ruhl gives a talk, and afterward he and the team engage the communities in conversation to talk about local solutions for ending poverty. Father Ruhl also addresses individuals in his presentations and urges them to make their own commitment to combat this issue.

The group also has been engaged in various service opportunities on their trek so far; in Denver the cyclists planned to serve a pancake breakfast for 400 people; and in Kansas City in mid-July they were scheduled to help at a social service fair.

“Everyone we meet has been very supportive of us and our cause,” Father Ruhl said. “People generally agree with the premise that fighting poverty needs to be a greater priority.”

Father Ruhl has been riding for five years, and he and his parish cycling team, Flying Fish, have done charity rides before, although those have covered only 150-170 miles each. For the cross-country trek, the priest was using the first three months of a sabbatical.

The Cycling for Change team has a support team of four and will be joined along the way by additional cyclists who will ride for shorter segments of the trip. Each cyclist was sponsored for the ride. Updates and information can be found on the team’s website http://cyclingforchange.org, where a blog and live tracker for Father Ruhl and the team is provided.

“It is truly inspirational to be riding,” Father Ruhl said. “All of us are amazed at the beauty of the earth we are seeing and view it is as a symbol of God’s generosity. … In response, we should be generous in return.”