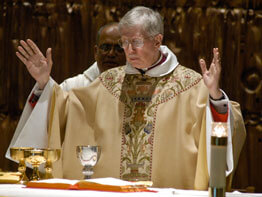 NEW YORK – Growing up in a family where “difference was normative” proved to be excellent preparation for Monsignor Robert Stern’s priestly career of building bridges between and among different cultural groups.

Monsignor Stern, a priest of the Archdiocese of New York, is the secretary-general of the Catholic Near East Welfare Association and the president of the Pontifical Mission for Palestine. He celebrated the 50th anniversary of his ordination in May.

Monsignor Stern’s Irish Catholic mother and his German Jewish father were married in a rectory in the Bronx, a borough of New York City. He was raised Catholic and attended public and private schools in and near New York.

He got his first whiff of anti-Catholic bias when he went to Amherst College in Amherst, Mass., to major in nuclear physics.

“It was a bit of a shock for a Bronx kid from a Catholic-Jewish neighborhood,” he said. “There was a condescension about the church and Catholicism, and a class thing, too.”

Monsignor Stern responded by “digging in more. It made me look more and more at my faith and my religion.”

And while he had never considered a vocation to the priesthood, several college experiences pointed him in that direction. “I wasn’t particularly attracted to being a priest, but there was the idea of being available for the work of God,” he said in an interview with Catholic News Service at his office in New York.

Monsignor Stern’s post-ordination assignment in a Puerto Rican parish on New York’s West Side – “the original West Side Story” – led to positions as assistant chancellor and director of the Spanish-speaking apostolate – by way of a doctorate in canon law from the Pontifical Lateran University in Rome.

Monsignor Stern’s Rome studies coincided with the Second Vatican Council, where he was a staff volunteer at the second and third sessions.

“It was fascinating,” he said. “It was a very powerful, very spiritual experience. The way it got filtered back in the States, it sounded very dry and political, but if you were in St. Peter’s during those sessions, the presence of the Holy Spirit was almost tangible.”

Back in New York, Monsignor Stern was amazed so few people knew about the specifics of the council. “This wonderful thing was going on in Rome and nothing was being filtered back.”

He said the training of New York priests in the “whole new vision of church and Christian life” articulated by Vatican II was condensed into two one-day workshops given by the late Cardinal John Krol of Philadelphia. “There were lectures and each priest got a complimentary copy of the Paulist Press edition of Vatican II documents.”

He said the instruction “was a typical American thing: ‘Turn the altars around, eliminate fasting in Lent and have everybody all upset.’ “

His ministry with Hispanics included introducing the Cursillo movement and extending diocesan formation, pastoral support, lay ministry and radio and television outreach to the Spanish-speaking groups.

He also led study pilgrimages to the Holy Land for Spanish-speaking parishioners from the South Bronx and for clergy from elsewhere in the archdiocese.

In 1985, the late Cardinal John J. O’Connor of New York assigned Monsignor Stern to the Catholic Near East Welfare Association, and in 1987 named him to the dual posts of secretary-general of the association and president of the Pontifical Mission for Palestine.

Catholic Near East is an organization of the Holy See that supports people and programs of the Eastern churches. The pontifical mission is its operating agency in the Middle East. The archbishop of New York is the ex officio president of Catholic Near East.

Monsignor Stern said that “most of the Eastern churches are minority in aspect” because they are in an environment that is otherwise Orthodox Christian, Muslim, Jewish or Hindu.

He said part of the mission of the two organizations he heads is to build bridges to fellow believers who are not Christian. “It’s the idea of one: one God, one world, one human family, one church.”

Bridges are often built with respect and thoughtful communication, he said. He drew parallels between Hispanic and Arab culture. “There are similar cultural values,” including respect for personalism, politeness and respect, he said.

Addressing the progress toward church unity, Monsignor Stern said, “Depending on how you look at unity, it’s almost entirely achieved or it’s hard to imagine it ever taking place.” He said the climate is more open and inclusive than before. “Although hierarchical and canonical distinctions exist, at the level of human life, there is very little distinction. They’re Christians first, as distinct from Muslims.”