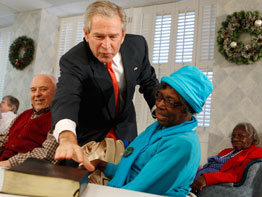 WASHINGTON – In a flurry of nervous anticipation, the Little Sisters of the Poor in Washington scrambled to finish last minute tasks and escort elderly residents to their seats as they prepared for a Christmas visit by President George W. Bush and first lady Laura Bush Dec. 18.

Mother Benedict Armstrong, superior of the Jeanne Jugan Residence, and Washington Archbishop Donald W. Wuerl led the president and first lady around the residence, a home for the poor and elderly run by the religious order.

They stopped in the “book nook,” where the president and his wife donated two books, and greeted Mary Ann Lucey, a volunteer librarian. Afterward the president and first lady greeted residents in the cafe and offered them Christmas cookies.

“I put a tie on and everything,” said a resident waiting to greet the visitors.

The president wished everyone a “Merry Christmas,” and told one resident that he reads the Bible every day.

Later the president and first lady proceeded to the auditorium where sisters, residents and volunteers were making Christmas cards for U.S. troops.

“Thank you all for making cards for our troops in harm’s way. As I worked the tables, I was most thankful that people here said that they pray for our troops, the safety of our troops,” the president said. He told the Little Sisters of the Poor that he was honored to be among people who show the nation it is possible to reach out to those in need.

“It is easy to feel the great compassion of the sisters here in this hall as you help make somebody else’s Christmas a joyous time of celebration,” he said.

The Little Sisters of the Poor take care of 75 poor and elderly people in the Jeanne Jugan Residence, and 24 people live in apartments on the premises. Internationally, the sisters take care of the elderly in 32 countries, and they have 206 homes worldwide, according to Mother Maria Christine Lynch, the provincial who oversees 10 homes run by the sisters.

“The Little Sisters of the Poor are renowned for their great hearts and wonderful compassion,” the president said.

The Jeanne Jugan Residence, established in 1982, offers many levels of care, ranging from independent living to nursing care at no cost to its residents.

Sister Mary Jeanette Mines, a native Washingtonian, said it is a joy to continue to give of herself.

“Hopefully other women will catch that fire. It is a life of sacrifice and sacrificial joy,” she told the Catholic Standard, newspaper of the Washington Archdiocese.

Pope John Paul II beatified Jeanne Jugan, the foundress of the Little Sisters of the Poor, in 1982, and her sainthood cause is moving forward, Mother Benedict said.

The president thanked the volunteers for taking time out of their schedules to help someone in need.

“That’s one of the messages of the Christmas season, that I hope our fellow citizens reach out and find a neighbor in need, find out somebody who needs a loving pat on the back, or somebody who could use a little help in learning how to read, or an elderly citizen who wants to know that somebody cares for them,” he said.

“During a season in which we count our blessings, I would hope those of us who are blessed help somebody else,” he said. “And there’s no better place to come to see that happening than right here.”