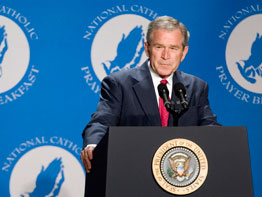 WASHINGTON – President George W. Bush said his concern about the growing loss of urban Catholic schools was a prime reason he was convening a summit on inner-city and faith-based schools the week of April 21.

“I am concerned about the loss of a major national asset, and that is the decline of Catholic schools, particularly in inner-city America,” he told an enthusiastic crowd of 2,000 gathered at the Washington Hilton hotel.

The summit is expected to draw educators, clergy, funders and business leaders to begin discussing options for public, private and parochial urban schools. President Bush said the goal was to urge Congress to develop “reasonable legislation” and practical solutions to “save these schools and, more importantly, to save the children.”

Citing the long history of Catholic education in the U.S., President Bush commended those in the audience who are working to preserve Catholic education. “I can’t thank you enough for your efforts,” he said as the gathering erupted in applause.

During his 17-minute speech President Bush also took time to reflect on his April 16 meeting with Pope Benedict XVI at the White House. He called the pontiff a humble servant of God, a brilliant professor and a warm and generous soul.

“He is courageous in the defense of fundamental truths,” the president said. “His Holiness believes that freedom is the Almighty’s gift to every man, woman and child on earth. He understands that every person has value, or to use his words, ‘Each of us is willed, each of us is loved, each of us is necessary.’“

President Bush praised the pope for his support of religious freedom around the world in the face of oppression and violence. “Throughout his time as Holy Father, the pope has worked to foster interreligious dialogue and to heal the wounds of religious conflict,” he said.

“I join him in praying for a world at peace, where Christians, Muslims and Jews, believers and nonbelievers, can live side by side,” the president added.

President Bush touted several efforts throughout his seven-year presidency to uphold human dignity, from ending the use of U.S. funds by organizations around the world that perform or promote abortion, to protecting unborn victims of violence and ending “the barbaric practice of partial-birth abortion.” He also expressed satisfaction in breakthroughs in stem-cell research that finds skin cells being reprogrammed to act like embryonic stem cells.

As President Bush was speaking, about 40 members of Catholics United quietly stood outside the Hilton holding two banners that echoed Pope Benedict’s Palm Sunday call for an end to the violence in Iraq. A spokesman said the group had gathered to question what they considered to be the partisan nature of the breakfast.

“This event was put together by an organization whose board of directors consists almost entirely of Republican operatives,” said James Salt of Catholics United, a nationwide online community working for justice and the common good. “As long as this event is being organized by an explicitly partisan board of directors, it lends an air of suspicion to everything that they do.”

The group spent about an hour outside the hotel before disbanding.

Austin Ruse, vice president of the National Catholic Prayer Breakfast and the master of ceremonies for the event, brushed aside claims of partisanship, saying Democrats and Republicans alike were in attendance and involved in planning the event.

“We know that there are a lot of Republicans here, but we are actively reaching out to Democrats and faithful Catholics on the political left, and we’re going to continue,” Mr. Ruse said. “We’re going to get them here. It takes time and dialogue and we’ve got it going.”

Acknowledging that the divide between what he called social justice Catholics and pro-life Catholics is wide, Ruse said the breakfast committee is committed to reaching out to broader communities in the church.