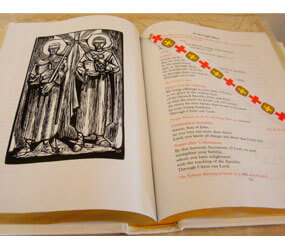 First in a seven-part series

The Congregation for Divine Worship and the Discipline of the Sacraments gave formal approval, “recognitio,” to the new English translation of the Third Typical Edition of the Roman Missal March 25. While some minor revisions are still being made, the text is pretty much as will be used when the change takes effect, probably sometime in late 2011.

The new translation will not change the way we celebrate Mass but it does make substantial changes to many of the prayers we are used to praying. The Second Vatican Council’s document on the liturgy, “Sacrosanctum Concilium,” called for the liturgy to be revised and simplified and to be translated into the vernacular –after almost 1,300 years of being celebrated only in Latin. Those changes were to help people understand better the great gift we have in the liturgy, especially the Eucharist, and to allow them to participate more actively. Indeed the active participation of all people, not just the priest, was a primary focus of the Council.

The first English translation, done shortly after the first revision of the Roman Missal in 1964, sought to capture the essential thoughts and images of the Latin original. The Roman Missal, called the Sacramentary in the United States, underwent two more revisions before 2000. For the Great Jubilee, Pope John Paul II called for a revision of the Roman Missal to include prayers for the celebration of recently canonized saints, additional prefaces for the Eucharistic Prayers, additional Masses and Prayers for Various Needs and Intentions, and some updated and revised rubrics (instructions) for the celebration of the Mass. This official Latin text of this revision was completed in 2002 and work began to translate this into the other major languages of the world.

Because the liturgy is so important, and in light of the theological, liturgical and practical developments since the Second Vatican Council, the Congregation for Divine Worship and the Discipline of the Sacraments Translation published “Liturgiam Authenticam,” a set of principles to guide the translation. Here, the church called for a translation that not only captured the basic thoughts and main images of the Latin original but one that was also as faithful as possible in word selection, grammar, and syntax as well. The bulk of the translation was done by two committees made up of scholars, liturgical experts and bishops: the International Commission for English in the Liturgy (ICEL) and “Vox Clara.” The translation was done in stages, each of which was voted on by the bishops and then sent to the Holy See for approval.

The new translation will help to place us and the way we celebrate Mass more in line with the Church Universal, including the Latin and other language translations. The new translation will also help to recapture some of the splendor of the Latin original. There has been a determined focus on maintaining the historic nature of the prayers and capturing the beautiful images and references of the original. These include greater attention to some of the theology of the liturgy, more exact statements of Scripture, and more use of poetic imagery.

Unquestionably, the new translation will also present some challenges. Change is always difficult, especially when it touches the Eucharist, something so important and constitutive of who we are as Christians. Indeed, there is great comfort and unity from knowing the prayers of the Mass and being able to pray them from memory. All – including priests! – will have to learn these prayers and it will take some time before the previous level of comfort can be reached. The syntax and some of the words in the new translation used will not be common but should elevate our minds and hearts to the reality and mystery we celebrate. These challenges provide all in the Church with an opportunity to study the liturgy again and come to a renewed and deeper appreciation of God’s love for us, given so freely and so fully in the Eucharist.

Over the next six weeks, this series in The Catholic Review will look to provide some assistance in this renewal and increased understanding. We will examine the different parts of the Mass that will help to set a context for the way we celebrate and for the new translation. We will also examine some of the new translations of the prayers.

A great aid in this can come from a recently published paperback book, “What Happens at Mass,” by Benedictine Father Jeremy Driscoll (Liturgical Training Publications, 2008). It’s an excellent, short, easy-to-read introduction to the great beauty and mystery of the Mass.

Monsignor Jaskot is the director of the Office of Worship for the Archdiocese of Baltimore.