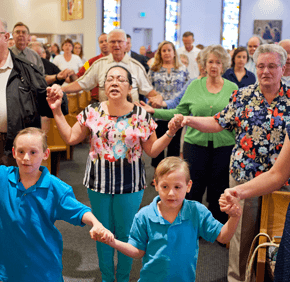 By Maria Wiering
mwiering@CatholicReview.org
ODENTON – Change is a part of life, agreed longtime St. Joseph parishioners Margaret Kaul and Monica Tozzi. The matriarchs of military families, they are used to embracing the new. The joining of their parish with Holy Apostles to form a new community is no exception.
“I think it’s a wonderful thing,” said Tozzi, 82. “It just makes common sense to unite.”
Parishioners of Holy Apostles and St. Joseph worshipped together as one community June 15, although the merger isn’t official until July 1.
Holy Apostles celebrated an emotional final Mass June 8, on the feast of Pentecost.
The Archdiocese of Baltimore announced the parishes’ joining last year. Since March they have been sharing a pastor, Father James P. Kiesel, after the retirement of St. Joseph’s longtime pastor, Father William L. Viola.
The parish is now known as the Greater Odenton Catholic Community, which is worshipping at the “St. Joseph campus.” The parish may consider taking a new name in the future, said Thomas Little, pastoral associate to Bishop Mitchell T. Rozanski, who has worked with the parishes as they prepared to join.
To view a slideshow, navigate the arrows below.
See a photo you might like to purchase? Click here.
Founded in 1999 as an independent mission, Holy Apsotles became a parish in 2004. Its members worshipped in a multi-purpose room at School of the Incarnation in Gambrills. Parishioners had hoped to build a church one day, but the archdiocese determined construction to be cost-prohibitive.
St. Joseph was established in 1924, but Odenton Catholics have worshipped in the area since 1891, first in a private home and then in a chapel.
The parishes worshipped about three miles apart, and both sent children to Incarnation, a pre-kindergarten-to-grade-eight school. Their geographic proximity and shared school gives members of the new parish “a common heritage,” Kaul said.
“This is a small-town area,” the 85-year-old added.
Almost 500 people attended the joining Mass, which began with a procession of sacred objects and sacrament records from both parishes, as well as icons of St. Joseph and Holy Apostles. The objects included those Holy Apostles parishioners had processed out of their worship space the week before. They were displayed in front of the altar during the Mass.
In his homily, Father Kiesel first focused on the Holy Trinity, whose feast was being celebrated, but then shared his vision for to the newly united community.
“Today … we bring our gifts, we bring our talents, we bring our brokenness, we bring our unity to the altar,” he said.
“We pray that we may be one,” he added, referring to Jesus’ prayer in his “farewell discourse” after the Last Supper recounted in Gospel of John.
Father Kiesel urged the members of the new community not to “hoard” gifts and talents from each other or their parish, but rather to be “good stewards” and to recognize that they are all made in “God’s image and likeness.”
“What wounds Jesus is division,” he said.
Little called the unifying Mass “a long-held dream come together.”
“It was nice to come and see a packed church,” he said.
Saying goodbye to Holy Apostles was emotional for founding member Anne Schene, but she called the unifying Mass “lovely.”
The congregation was an even mix of people from both parishes, she noted.
“It’s nice to see familiar faces,” she said. “I guess we hate change and we want what we’re used to, so seeing Father Jim’s leadership and our friends and parishioners was heartwarming.”
She said she teared up when parishioners joined hands across aisles to recite the Lord’s Prayer. Joining hands was a tradition at Holy Apostles, but not at St. Joseph. Schene, 49, was glad to see it “brought over.”
She wants to be sensitive to parishioners who belonged to St. Joseph, she said, and hopes they don’t feel “invaded.” Her family welcomes the option of a Saturday evening Mass, which Holy Apostles never offered.
“There’s going to be good changes,” she said.
Also see:
Pope: Corruption is easiest ‘sin at fingertips’ of anyone with power
Baltimore’s new priests will include engineer, 49
Best advice from fathers
PrevNext