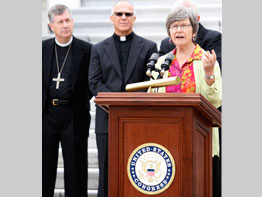 WASHINGTON – The needs of poor and marginalized people deserve the same attention from government officials as the current needs of Wall Street’s failing financial firms, said a group of religious leaders.

Praying outside the U.S. Capitol Sept. 16, Catholic, Protestant, Islamic and Jewish leaders invoked the words of the prophet Micah in calling upon candidates for public office in the Nov. 4 election to join with Americans of faith concerned about the growing poverty in the U.S. to work for justice for the poor.

“We religious people need to be as strong as we can be here in America,” said Rabbi Steve Gutow, executive director of the Jewish Council for Public Affairs, at the start of an hourlong program. “We need to build an army of faithful who wish to take our view of God’s message into the vineyards of public life and to the public square.”

Rabbi Gutow, who coordinated the service that closed the “Fighting Poverty With Faith: A Week of Action” effort with Father Larry Snyder, president of Catholic Charities USA, said that the growing poverty in America threatens to undermine the spirit of justice promised by God.

“We pledge that this is just the beginning,” he said. “We will do all we can to hold America’s political leaders accountable to uphold their own values and their own commitments.”

Father Snyder told Catholic News Service that the week was guided by a desire to unify poverty-fighting efforts among faith communities.

“What we tried to do with this week is to have an event that would galvanize our efforts to bring (poverty) to the forefront of people’s consciousness so they could see there’s a lot more to be done,” Father Snyder said. “The real impact on poverty will be made through local people coming together in an interfaith way to really raise the issue of people living in poverty.”

Catholic Charities has introduced its own Campaign to Reduce Poverty in America with the goal of halving poverty by 2020. As the campaign continues, Father Snyder is hoping that having many voices talking about the needs of the 38 million Americans living in poverty will lead to national and local policies that help people in need.

During the service speakers discussed how poverty has grown in recent years, but said little attention has been given to the needs of the poor. The Rev. James McDonald, vice president for policy and programs at Bread for the World, an international Christian citizens’ movement that fights hunger, contrasted the lack of response to the poor with the quick action by the federal government to bail out failing financial firms as the mortgage crisis envelops the national economy.

Two Democratic members of the U.S. House of Representatives, Barbara Lee of California and John Sarbanes of Maryland, also spoke, pledging to make the issue of poverty a priority in the next session of Congress.