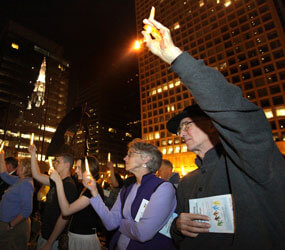 WASHINGTON – Churchgoers around the United States Sept. 11 shared in moments of silence, special prayers, homilies and other ways of observing the 10th anniversary of the 2001 terrorist attacks.

Official ceremonies at the sites in New York, Virginia and Pennsylvania where four hijacked planes were crashed were restricted to family members and invited dignitaries. But smaller events around the country and normal Sunday Masses and church services were devoted to prayers for the victims and for the healing of the United States.

In New York, Archbishop Timothy M. Dolan told the congregation at St. Patrick’s Cathedral for morning Mass that 10 years ago it might have seemed that “the side of darkness had conquered, as innocent people perished, as valiant rescuers rushed to their aid, as families were fractured, and as a nation seemed on the ground.”

But, he went on to say that “as a matter of fact the side of light actually triumphed, as temptations to despair, fearful panic, revenge and dread gave way to such things as rescue, recovery, rebuilding, outreach and resilience. The side of the angels, not of the demons, conquered. Good Friday became Easter Sunday. And once again God has the last word.”

Archbishop Dolan cited the example of the aspirations of many children to follow in the footsteps of their parents: firefighters and rescue workers who were killed as they worked at the World Trade Center.

It reads, in part, “God is our refuge and strength, a very present help in trouble. Therefore, we will not fear …, Come behold the works of the Lord who has made desolations in the earth. He makes wars cease to the ends of the earth. He breaks the bough and cuts the spear in two. He burns the chariot in fire. Be still and know that I am God.”

In Washington, retired Cardinal Theodore E. McCarrick reread his homily from an impromptu Mass celebrated on Sept. 11, 2001, and told a contemporary congregation of more than 2,500 people at the Basilica of the National Shrine of the Immaculate Conception that they must continue to look forward, relying upon “our values as Americans and our faith and trust in God. If we stop believing, if we stop forgiving, we stop living.”

In Shanksville, Pa., The Catholic Register, newspaper of the Diocese of Altoona-Johnstown, reported on a dedication ceremony Sept. 10 for a memorial at the site where United Airlines Flight 93 was forced to the ground by passengers who took control of the plane from terrorists who intended to crash it in Washington.

“You are an inspiration for these people (more than 10,000) gathered here today and to those watching on television,” Biden said to the families of the passengers and crew who sat before him. “By watching you they know that there is hope.”

Biden said that “their example defines America. None of them asked for what happened. They knew it was the opening shot in a new war. They stood up and they stood their ground.”

“I never failed to be astonished by the courage they exhibited,” he added. “That heroism is who we are and that courage beats deep in the heart of the nation.”

Bush said the passengers and crew, who were from all walks of life, demonstrated democracy at its best.

“When they realized what was going on they took the news calmly. They came together as one, took a vote and developed a plan of action in one final act of democracy.

“What happened above this field ranks among the greatest acts in American history,” Bush said. “They laid a legacy of bravery and unselfishness that will never be forgotten.”

Contributing to this roundup was Bruce Tomaselli in Shanksville.