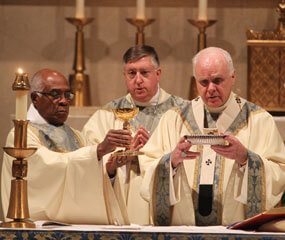 Deacon Rodrigue Mortel neared the end of his homily Jan. 12 at the Cathedral of Mary Our Queen in Homeland.

“Proclaim the good news,” Deacon Mortel said, “by assisting all victims in whatever form.”

Deacon Mortel spoke at a Mass celebrated by Archbishop Edwin F. O’Brien, part of a national commemoration instituted by the U.S. Conference of Catholic Bishops to mark the one-year anniversary of the magnitude-7 earthquake that devastated Haiti, the poorest nation in the Western Hemisphere.

People from around the Archdiocese of Baltimore were in attendance. Many who filled the pews at the cathedral’s Lady Chapel call it their home parish, one that has mobilized its considerable resources in preparation of formally joining Baltimore’s Operation Haiti.

Founded by Deacon Mortel, a native of Haiti, Operation Haiti already partners 19 parishes in the archdiocese with one in the Caribbean nation’s Diocese of Gonaives.

The Cathedral of St. Charles Borromeo, in the city of Gonaives, to the north of Deacon Mortel’s hometown of St. Marc, has yet to get a sister parish here, but the Cathedral of Mary Our Queen will change that.

“After the earthquake, we recognized the need for help,” said Monsignor J. Bruce Jarboe, who became rector of the cathedral two weeks before the earthquake. “We wanted to establish a partner relationship, and perhaps cathedral to cathedral is a good idea.

“We understand from Deacon Mortel that is in a pretty challenging area, with lots of opportunities for us to help.”

In mid-February, Deacon Mortel will guide Monsignor Jarboe and other leaders of the cathedral parish to the city of Gonaives. In doing so, the cathedral will follow the lead of parishes from St. John the Evangelist in Hydes to St. Ann in Hagerstown to St. Clare in Essex, among those in the archdiocese with a record of generosity toward Haiti.

“This trip is designed to start this conversation,” Monsignor Jarboe said. “Learn who they are, their parish life and story, and they can learn a little about us.”

Individually and collectively, the cathedral parish has already reached out to Haiti.

Ken Hackett, the director of Baltimore-based Catholic Relief Services (CRS), is a parishioner of the cathedral. So is Dr. Robert R. Redfield Jr., a professor at the University of Maryland School of Medicine who has forged pilot educational programs in Haiti.

Three days before the commemorative Mass, the cathedral’s service outreach committee for Haiti partnered with CRS in a pilot meal packaging program that prepared more than 20,000 meals to be shipped overseas. According to Paddy Malone, a member of the parish committee, meal packages consisted of rice, soy meal, dried vegetables and vitamin supplements.

More than 200 volunteers packed the Cathedral School’s gymnasium for the Jan. 9 outreach.

“We had seniors, students, little kids, people across the board showing up to help,” Monsignor Jarboe said.

Deacon Ray Moreau, chief administrative officer of the cathedral, forwarded an e-mail with comments from participants.

“To have hands-on on something that is actually going to make a difference in someone’s life,” parishioner Norma Delgado wrote, “and to know that it’s going to go exactly where it’s intended makes our hearts feel good. This type of unity and community involvement makes people want to do more.”

In the city of Gonaives, the capital of the Department (state) of Artibonite, cathedral will find a sister parish near the heart of the Haitian independence movement of the early 19th century. The city is also home to the Cardinal Keeler Trade School, another venture of Deacon Mortel’s, named for his friend, Cardinal William H. Keeler, archbishop emeritus of Baltimore.

“It’s extremely important that Baltimore’s Operation Haiti extend to the cathedral in Gonaives,” Deacon Mortel said. “It’s located in the city of independence of Haiti, where many official observations are held. In addition, the parish is in an area that is among the most destitute in the city.”