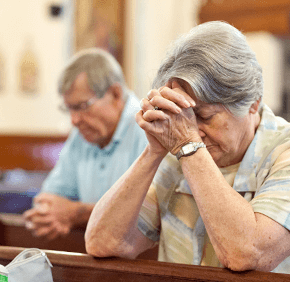 By Maria Wiering
mwiering@CatholicReview.org
LITTLE ITALY – Eleven hours before President Barack Obama announced his plan to launch air strikes in Syria to combat the Islamic State in Iraq and Syria (ISIS), a small group of Catholics sat down in St. Leo the Great Catholic Church in Baltimore to pray for world peace.
The violence in the Middle East, Gaza Strip or Ukraine was not the event’s prime motivator, although it’s now relevant, said St. Leo’s pastor, Pallottine Father Salvatore C. Furnari.
Planning for the Novena for World Peace began last year, after a similar event in Medjugorje, Bosnia-Herzegovina, a popular pilgrimage destination. Father Furnari served as a chaplain on the trip.
The novena at St. Leo includes a series of traditional prayers such as the Stations of the Cross, rosary, Divine Mercy chaplet and psalms; eucharistic adoration; and Mass.
Prayer solution
The novena, Sept. 10-20, begins most days at 9:30 a.m. in the church, with a break from 11:45 a.m.-1:45 p.m. It typically concludes after 3:30 p.m. Mass.
The novena – a nine-day devotion – attracted Dave and Toni Nealy, both 76, from their home near Indianapolis.
“Prayer is the only thing that’s going to solve anything,” Toni said.
The novena’s focus on world peace is “broader” than war or geopolitical conflicts, Dave said. The prayers ask God to bless families, marriage, priests and end abortion, addiction and sin, with a focus on personal and worldwide conversion with widespread return to prayer, fasting, sacrifice and the sacraments.
St. Leo’s novena is extended to 11 days.
As for the novena overlapping with several dire situations around the world, Father Furnari said, “I don’t think that’s accidental.”
He expects the novena to be “a source of blessing and grace” for the parish and its pilgrims.
“I did the same program at Medjugorje, (and) on a personal level I did receive many blessings and grace,” he said. “As a result, I’d like to be able to have my parishioners derive and receive through these programs of prayer and devotion the same blessings, grace and peace from the Lord.”