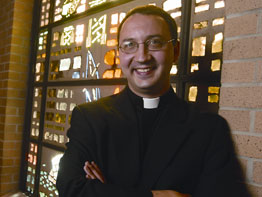 When John Rapisarda was a student at The John Carroll School in Bel Air, he played guitar in a punk/alternative band and spent time with friends and family. The soft-spoken teen with a sense of humor had no inkling that he would one day become a Catholic priest.

According to Rev. Mr. Rapisarda, who is now a transitional deacon for the Archdiocese of Baltimore and will be ordained a priest June 21, his John Carroll religion teacher, Sister Marie Gregory DiGioia, S.S.J., told him she could picture him on the altar.

“What I said to John in his senior year was, ‘John, I don’t know when, and I don’t know where, but at some point in time, it would not surprise me that I look up and see you standing behind the altar offering Mass,’ ” recalled Sister Marie Gregory.

She said John had strong role models in his parents and was always one of the first to volunteer his assistance.

“If I were to summarize words that characterize John to me both now and as a student, those words would be: I was always deeply struck with his integrity and his authenticity, and this was definitely reflected in his deep faith,” said Sister Marie Gregory. “He had a steadfast love and substantive devotion that he definitely manifested, particularly in his relationship with God, his family, the church and others.”

Rev. Mr. Rapisarda, who just turned 31, will be the sole deacon ordained a priest by Archbishop Edwin F. O’Brien during a tradition-rich ceremony at the Basilica of the National Shrine of the Assumption of the Blessed Virgin Mary in Baltimore. His journey to the priesthood has taken numerous twists and turns.

Initially, Rev. Mr. Rapisarda was simply interested in learning more about theology. After a year-and-a-half of study at Harford Community College, he attended Franciscan University of Steubenville in Ohio, where he earned a bachelor’s degree in history in 2000. He had a girlfriend during that time, and after the relationship ended, he studied in Austria, deliberately avoiding discerning his vocation for a period of time.

It was in Austria, he said, that he really learned to pray.

“The priesthood was coming up more, and I found that being with the Lord – it completed me,” said Rev. Mr. Rapisarda, as he sat in the chapel of St. Joseph, Fullerton, where he is currently serving. “In prayer, I found peace and strength, and then the question of a vocation to the priesthood flowed from that.”

Rev. Mr. Rapisarda chose to join the Carmelite Order, with the intention of doing missionary work. His family, who had prayed together every day as Rev. Mr. Rapisarda was growing up, often saying the rosary, was supportive of his decision. He said his mother, Carol, who became a Catholic, really brought the rosary into the family. His father, Gregory Rapisarda, who was ordained a permanent deacon in 2003, serves at St. Margaret, Bel Air.

It was while Rev. Mr. Rapisarda was attending St. Vincent Seminary in Latrobe, Pa., and studying to be a Carmelite priest, that he learned his mother had cancer and had only months left to live.

He returned home to Bel Air in May 2004 to be with his family, including three siblings. He lauded his mother for her strength and said she lived for two years, dying in January 2006. During that time, Rev. Mr. Rapisarda studied theology at the Dominican House of Studies in Washington, D.C., and volunteered at St. Margaret, teaching religious education classes.

“I found that I could be active in a parish and still maintain a prayer life,” said Rev. Mr. Rapisarda, who had feared being a parish priest wouldn’t allow him adequate time for prayer.

Once Rev. Mr. Rapisarda chose to become a priest for the Archdiocese of Baltimore, he picked up his studies where he left off, fulfilling his pastoral year at St. Louis, Clarksville, and then moving on to St. Joseph.

“I realized there was no way I could have taken this journey without God calling me and bringing me to the right place at the right time,” said Rev. Mr. Rapisarda, when referring to the Lord’s grace.

As he nudged his dark, wire-rimmed glasses up on his nose, the easy-going transitional deacon said he’ll be thinking about “plenty” as he is on the altar of the basilica June 21.

His ordination day will be tinged with sadness as he thinks of his mother, but Rev. Mr. Rapisarda said “she continues to walk with me and help me.”

He said that as a priest, he is most looking forward to celebrating the Mass and hearing confessions.

“Being a spiritual father – that’s the heart of it – teaching people to pray,” he said.