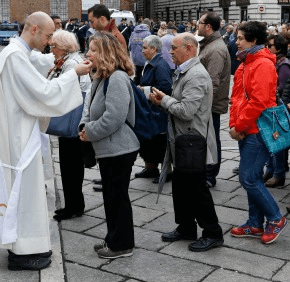 ROME – When a Lutheran woman married to a Catholic man asked Pope Francis what she and her husband could do to receive Communion together, the pope said he could not issue a general rule on shared Communion, but the couple should pray, study and then act according to their consciences.

“I would never dare to give permission for this because it is not in my authority,” the pope told Anke de Bernardinis after a lengthy response about the faith Catholics and Lutherans share and the ecumenical goal of full unity.

The pastor of Rome’s Christuskirche, a parish of the German Evangelical Lutheran Church, welcomed Pope Francis to an evening service Nov. 15 by telling him dialogue requires that people get to know one another.

To start the process, he said, several members of his congregation had questions for the pope. As they asked their questions, the pope took notes.

A little boy asked the pope what he likes best about being pope, to which the pope responded, “being a pastor.” He said the formal duties of the papacy, especially the paperwork, were things he endured, but he liked being able to visit the sick, listen to people with problems and visit prisoners.

A Swiss woman asked the pope what Christians can do to help refugees and ensure Europeans do not start erecting new walls. “Speak clearly, pray – because prayer is strong – and serve,” the pope responded.

De Bernardinis told the pope that she and her husband were happily married and shared many “joys and sorrows,” but they could not share the Eucharist.

Pope Francis told her the issue is not an easy one to resolve and responding was made even more difficult by the presence in the front row of “a theologian like Cardinal (Walter) Kasper. I’m afraid!”

Clearly, the pope said, all people in heaven will share the Lord’s banquet at the end of time. “But on the journey, I ask myself – and I don’t know how to respond, I’m making your question my own – I ask myself, ‘Is sharing the Lord’s Supper the aim of the journey or is it ‘viaticum’ for walking together?’ I leave this question to theologians, to those who understand.”

In general, the Catholic Church teaches that in most cases, only Catholics free from mortal sin may receive the Eucharist at Mass, although members of the Orthodox churches also may receive in special circumstances.

The Code of Canon Law, however, does envision a narrow set of circumstances in which eucharistic sharing is possible “if the danger of death is present or if, in the judgment of the diocesan bishop or conference of bishops, some other grave necessity urges it,” as long as the non-Catholic party shares the Catholic belief in the meaning of the Eucharist.

A committee formed by the U.S. Conference of Catholic Bishops’ Committee on Ecumenical and Interreligious Affairs and the Evangelical Lutheran Church in America recently released a document summarizing 50 years of formal Catholic-Lutheran dialogue, which included joint recognition of the Eucharist as the body and blood of Christ.

“Lutherans and Catholics agree that sharing in the celebration of the Eucharist is an essential sign of the unity of the church, and that the reality of the church as a community is realized and furthered sacramentally in the eucharistic celebration,” the document said.

“The Eucharist both mirrors and builds the church in its unity,” the U.S. statement said, reflecting Pope Francis’ comment about the possibility of seeing shared Communion as a sign of full unity or as provisions and nourishment – “viaticum” – for the journey toward full unity.

A Catholic-Lutheran couple, he said, shares the same baptism and the same faith in Jesus. Their baptismal bond grows as they pray together and raise their children believing in Jesus.

“Life is greater than explanations and interpretations. Always refer to your baptism – one faith, one baptism, one Lord, as St. Paul tells us – and take the consequences from that,” the pope told De Bernardinis. “Speak with the Lord and move forward. I won’t say anything more.”

At the end of the evening, the Lutheran community gave Pope Francis an Advent wreath and Pope Francis gave the community a gold chalice, similar to the chalices he gives when visiting Catholic dioceses and parishes.